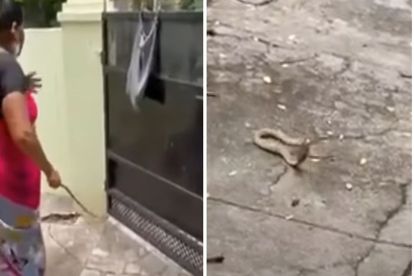 An unidentified woman has gone viral after ‘coaxing’ a cobra to leave her house.

The king cobra and its various species – are the most venomous snakes on the planet. The king cobra can literally ‘stand up’ and look a full-grown person in the eye (as seen in the video below). When confronted, they can lift up to a third of its body off the ground and still move forward to attack, reports National Geographic.

Fortunately, any of the various species of the highly venomous snakes are shy and will avoid humans whenever possible. It’s not clear whether the woman in the following video know what she is up against, but people are surprised by the way she ‘asks’ a cobra to leave her house.

In the video that was taken in Coimbatore in South India, the woman is seen using a stick to nudge the cobra that had entered the house.

Instead of panicking, she gently signalled the cobra to go outside the gate.

She even promised to visit the snake later and feed it milk, reports Shriman Entertainer. The video proceeds to show how the snake slithers outside the house. The woman continued her coaxing with kind words and even requested it not to return to the house and avoid further human contact for its own safety.

The king of snakes is protected under Schedule II of the Wildlife (Protection) Act 1972 and its rescue, handling and release are done only with the consent of the Forest Department.

The cobra is also referred to as the tiger of the reptile kingdom as it is the top-most predator among snakes.

“It is a flagship species that indicates the health of the herpetofauna around it. More focus is needed on the protection of the habitat. In Karnataka, king cobras are revered and protected (unlike in some other parts of India),” said king cobra expert and herpetologist P. Gowri Shankar of Kālinga Centre for Rainforest Ecology, Agumbe.