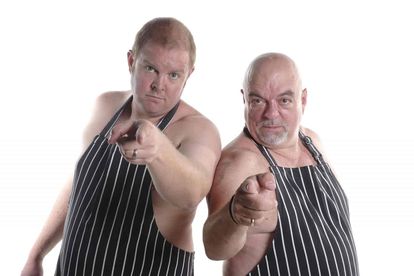 Getting creative online (and in the kitchen), comic genius, Chris Forrest, and celebrity chef, Pete Goffe-Wood, are re-creating a night out by scrumptiously blending comedy and cooking together into the ‘Top Gear‘ of cooking shows with their lockdown version of Don’t Burn Your Sausage on 18 July 2020.

About Don’t Burn Your Sausage

“Deliciously funny and rather ‘whisk-qué, this cheeky duo will demonstrate how food and sex are delectably intertwined as they prepare the ultimate seductive 3-course meal with a naughty line-up that will have you salivating salaciously and crying with laughter,” a press release reads. “This refreshingly funny show is jam-packed with great humour and great cooking – with Chris working his special brand of South African humour alongside Pete Goffe-Wood’s unmatched cooking talent, candour and naughtiness. This pair will win over your hearts and your stomachs.”

Following sold-out shows in Grahamstown, Cape Town, Johannesburg and Windhoek, the duo has cleverly and successfully delivered this live food show to rave reviews from critics and adjusting to the times, this will be their first online show.

About Chris Forrest and Pete Goffe-Wood

Chris has been on the SA comedy scene since the late nineties and Pete (best known as the Masterchef South Africa judge known to crack a joke or two), has been making great food for nearly 30 years.  When the two of them met on the set of Celebrity Masterchef SA in 2015, they found that they had a couple of things in common – one of them being the same dry sense of humour and the other, a liking for mouth-watering, delicious food.  After the series ended, they decided to combine their respective talents to bring you this culinary comedy show, the likes that have not been seen before in SA.

The show promises to be an absolute hit for both food- and comedy-lovers alike.

Tickets for Don’t Burn Your Sausage are available at R80 via https://mzanzilive.tv/. The show starts at 20:00.