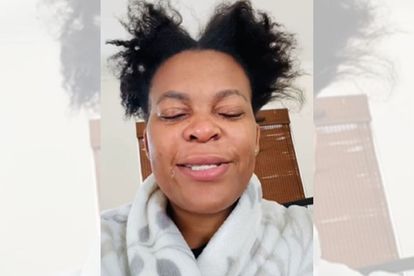 Zodwa Wabantu details the abuse and hate she receives from women and girls.
Image via Instagram @zodwalibram

Zodwa Wabantu details the abuse and hate she receives from women and girls.
Image via Instagram @zodwalibram

Days after a video of her removing her underwear on stage went viral, Zodwa Wabantu has tearfully thanked her fans for supporting her.

The dancer and entertainer took to her Instagram account to post an emotional video in which she reflected on how appreciative she was to be successful and loved.

‘I JUST WANT TO BUY BREAD AND EGGS‘

With tears streaming down her face, Zodwa thanked her 1,9 million Instagram followers as well as those who she professionally worked with.

“All the people who make the decision to say Zodwa Wabantu, we want her on board, all the major deals, bookings, clubs, shisa nyamas and our friends who mention our names in meetings.

“You could be a barman, a waitress, a security guard at the gate of a club or shisa nyama, ngiyabonga nga khulu [thank you very much]”.

Zodwa also claimed that she was not about a materialistic lifestyle, despite the image she portrays.

And the mom-of-one also insisted she was not drunk or depressed in the video.

And it’s not just Zodwa who is appreciative of the life she’s living – her “Ben 10” boyfriend Ricardo also posted a heartfelt sentiment of his own on social media.

Posting a clip of him smoking hubbly bubbly and dancing in a club beside Zodwa and music producer DJ Tira, he wrote: “Don’t judge each day by the harvest you reap but by the seeds that you plant. My biggest motivator in life @zodwalibram”.

And the bond is strong between the couple. Zodwa responded to the post, gushing: “You are my Everything… I listen to you, you listen to me that’s the biggest motivator to love and be great in this world”.