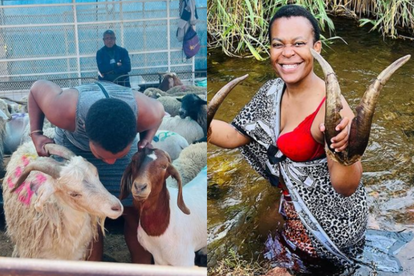 A few days ago, many South Africans wondered whether or not Zodwa Wabantu was becoming one of many local celebs to transition into a sangoma. The exotic dancer just confirmed everyone’s suspicions when she headed online to confirm that she has just accepted her ancestral calling.

Her post received many reactions from fans who congratulated her on embracing the calling.

Zodwa Wabantu is the latest South African celebrity to transition into a gogo. The socialite took to her Instagram on Monday 17 January to share a snap of herself wearing the traditional clothes worn by traditional healers.

Needless to say, her post took many people by surprise.

Speaking to TshisaLive however, Zodwa knew that she would be transitioning after she first started having dreams late last year.

“The dreams started in September and October, but I’ve always been this person. I don’t wear makeup, I wear expensive watches and earrings and they get lost and now I know it’s because they don’t want them.”

She also shared with the publication how she started the process by buying a R35k goat and going to a body of water. According to Zodwa, she has not been initiated yet but still needs to do four more ceremonies.

No weaves and makeup

The famous dancer then went on to say that she finally realises why she has been going naked and avoiding things such as weave and makeup. According to her, the ancestors do not want those kinds of things.

“No wonder I’ve been walking around naked. They make you lose your mind in different ways, so they were taking me out of poverty and gave this kind of life so that I have my fill. They know that’s not the end to me, it’s not my purpose that I have to fulfil.

“They don’t want a weave, they don’t want make up; now I understand why I was different, it was them. I don’t fit in, I have no desire to be wanted, I walk alone, and I’m different. So it was not me, because I’ve chosen to be that way. I was built to not fall for anything.”

ALSO READ: What the what? Zodwa wishes she could give all her fans her private parts!