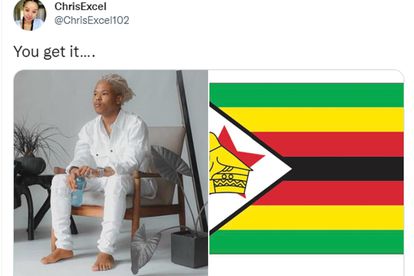 Nasty C has become the joke of tweeps who mocked the size of his toes.
Image via Twitter
@chrisexcel102

Nasty C has become the joke of tweeps who mocked the size of his toes.
Image via Twitter
@chrisexcel102

Nasty C has been dragged into the social media rumours surrounding Zimbabweans who sell their toes for cash.

But what do either have to do with each other?

According to trolls, Nasty C may be in for a large sum of money, given the large nature of his toe size.

ALSO READ: Money woes or toes? SA tweeps joke about chopping off their toes for cash

This week, pictures, and videos of people missing their toes – or even having them chopped off – went viral on social media.

One popular post reads: “In Zimbabwe, people have started selling their toes for thousands of dollars. This is due to the high cost of living and the failure of the government to create jobs. The big toes are being bought at $40,000, while the smaller ones [sell] at $20,000”.

In another post, a man is heard saying he had sold his baby toe and used the cash to buy a Toyota Hilux DG6 truck. The man tells the public to also sell their toes to make quick money.

Nasty C found himself as the butt of one joke after Twitter troll Chris Excel poked fun at his toes. Posting a picture of a barefoot singer and the Zimbabwean flag, he tweets: “If you know, you know”.

And tweeps were just as amused, joking that the SA rapper could make a fortune with just one toe.

@muzikayifani_t: “He could be the next Elon Musk”

@Disguys99: “Don’t give him ideas, He’ll bankrupt the Mbhonsi scheme”

@bhekijunz: “Nasty C can get a Buggati for that one”

His toe can get him a Bugatti 😭 pic.twitter.com/b0xMQFDyLR

But whilst the rumours of “toes for cash” continue to run rampant on social media, government officials have poured cold water on the wild claims.

“As government, we did research on the issue and we realised that it is false,” said the deputy minister of information, Kindness Paradza.

He added: “These are social media reports aimed at tarnishing the image of the country”.