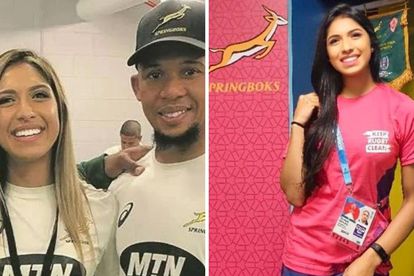 Zeenat Simjee may be forced to reurn home amid the Springboks European tour following reports player Elton Jantjies admitted to having an affair with her.
Images via Instagram
@eltonjantjies/Facebook @zeenatimaans

Zeenat Simjee may be forced to reurn home amid the Springboks European tour following reports player Elton Jantjies admitted to having an affair with her.
Images via Instagram
@eltonjantjies/Facebook @zeenatimaans

South Africans on social media are having a field day amid claims that Springboks dietician Zeenat Simjee may be forced to return home amid their tour abroad – again – over reports player Elton Jantjies admitted to their “affair”.

According to News24, Zeenat met with rugby bosses this week who will decide her fate. The Springboks are currently in France as part of their end-of-year European tour.

The revelation comes days after Elton came clean to his wife Iva – and the country – about his involvement.

WILL ZEENAT SIMJEE FACE THE MUSIC?

According to News24, Zeenat Simjee had a meeting with South Africa Rugby president Mark Alexander and chief executive officer Jurie Roux at the Springboks team hotel in Toulon on Wednesday.

And on the agenda was the possibility that she may have to return home amid the scandal.

Whilst the Springboks face off against France on Saturday, Zeenat could be packing her bags, like she and Elton did before, amid the World Championships in August when news of their alleged affair came to light.

As a result of the controversy and amid an injury, Elton was left off the Springboks squad. Zeenat, however, returned to work not long thereafter.

Earlier this week, Elton confirmed to News24 that he had indeed embarked on an affair with Zeenat Simjee. The flyhalf’s wife Iva Ristic also confirmed to the publication that he had disclosed this to her.

He said of his lapse of judgement: “At the end of the day what happened, happened. I am not proud of it, but I am learning to deal with it and start afresh. My family is my life and right now I am working on getting my rugby career back on track”.

He added: “I know my actions have caused a great deal of pain to everyone, especially my wife who has always been by my side. I have apologised to her and have made it my mission to make it up to her for as long as I live”.

Elton is currently in Cyprus with his wife and children.

Meanwhile, social media has been buzzing with rugby fans weighing in on the drama. Many Twitter users feel the possible action against Zeenat Simjee is warranted…

@dramadelinquent: “She brought disrepute to our national team just as much as Elton did. Both should face consequences”

@Iwanttoknow50: “She should resign or face being fired. She told bare-faced lies and brought the sport into disrepute when she demanded apologies. Who needs to apologise now?”

@marilyn_meth: “She must be removed, there are lots of married men on the team and clearly that means nothing to her”

@ntlez_21: “The other wives won’t trust her around their husbands. The husbands don’t want an earful from their wives; so back home she goes”

Others claimed that the action was too harsh and even unfair…

@kj435679: “So many comments blaming her as if she was the married one. She wasn’t. Elton made his decision, despite being married”

@kazaba_luc: “Let the lady do her job. She was scammed by a married man. She has learned her lesson”