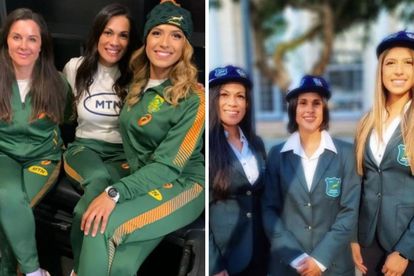 Zeenat Simjee’s insinuation that Elton Jantjies was having an affair with a woman who looked like her has seemingly not gone down well with the women in the Springboks camp.

That’s because Zeenat’s lawyer Frikkie Erasmus implied that the mystery woman was someone who worked for the national team, currently abroad as part of their end-of-year European tour.

Zeenat and Elton have been embroiled in a messy back-and-forth over allegations of an affair earlier this year.

LET THE DEBATE BEGIN | IS THIS THE SPRINGBOK TEAM TO SLAY ENGLAND?

Whilst the married man has insisted that Zeenat was the woman he wined and dined at a guesthouse in Mbombela in September, the latter has continued to deny it.

ALSO READ: Elton Jantjies claps back at Zeenat’s denial: ‘She knows the truth’

WHO ARE THE WOMEN IN THE SPRINGBOKS CAMP?

Speaking to Netwerk24 last week, Simjee’s lawyer Erasmus claimed that the woman spotted with Elton Jantjies in Mbombela was someone who looked just like the dietician.

According to Rapport, Erasmus also claimed that the woman was a member of the Springboks team.

Zeenat is one of a handful of women employed by the Springboks.

Like Zeenat, Rene has long dark hair and a slim frame. She has been a part of the team since 2008.

According to pics posted on her Instagram, she is in a happy relationship and has a young son.

Zeena is the go-to person for all media queries for SA Rugby. She has been with the team since 2013.

According to a Netwerk24 report last year, Leilani – also an athletic brunette – accused Mpumalanga team manager Samuel Sikiwe of slapping her in an altercation.

According to Rapport, all three women deny having a romantic relationship with Elton Jantjies.

Which begs the question, who is the mystery woman caught in a hotel tryst with the married man and father of three?

Meanwhile, various publications have made mention of Zeenat Simjee’s communication with Elton Jantjies, which they have claimed to have seen.

According to Rapport, Elton’s wife Iva sent “proof” of the affair to SA Rugby director of rugby Rassie Erasmus – in the form of screenshots of text messages.

Iva claims the texts alleged that Elton’s affair with Zeenat has been ongoing throughout various team matches.

One of the screenshots includes a reservation for a romantic boat ride at the Sydney Harbour – allegedly before the Springboks vs Australia Test match on 3 September.

Others show hotel and flight bookings for two. In one of the messages, Zeenat tells Elton to “divorce” Iva, whom she describes as a “horrible woman”.

Netwerk24 reported that Zeenat further texted Elton, demanding that he remove all her pictures off his social media account – something he has done.

Speaking to the publication, Frikkie Erasmus shot down claims made by Iva that his client was still communicating with Elton via text.

Erasmus said: “She [Zeenat] showed me her last three conversations with Elton. In all of them, she asks him to leave her alone, that she doesn’t want to talk to him, and that he is a bad friend”.