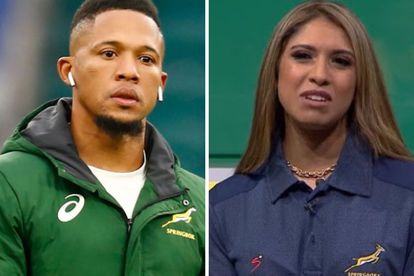 Zeenat Simjee’s lawyer has clapped back hard at claims made by Iva Ristic – Elton Jantjies wife – that she is still texting the married man.

The Springboks dietician has distanced herself from allegations of an affair with the flyhalf, insisting that the drama is a “case of mistaken identity”.

Zeenat attempted to set the record straight via her representative in an interview with Netwerk24.

Speaking to Netwerk24, Zeenat Simjee’s lawyer Frikkie Erasmus shot down claims made by Iva that his client was still communicating with Elton via text.

Erasmus said: “She [Zeenat] showed me her last three conversations with Elton. In all of them, she asks him to leave her alone, that she doesn’t want to talk to him, and that he is a bad friend”.

Zeenat’s lawyer also claimed that her name had been dragged through the mud as a result of allegations. He also claimed that contrary to claims made in the press, Zeenat did not accompany Elton to a guesthouse in Mbombela.

He said: “Zeenat Simjee has suffered enormous damage and continues to. Everyone says she is excellent at her job. She was not there. She was at a family funeral. It’s easy to make allegations”.

In September, Zeenat issued a statement vehemently denying allegations of an affair. In it, she accused Rapport – who broke the story – of “tarnishing me personally and degrading my dignity”.

She added that the allegations of her liaising with Elton Jantjies at a guesthouse was “devoid of any truth”.

WHERE IS ZEENAT SIMJEE NOW?

Over the weekend, Rapport claimed that Iva had approached Springboks coach Rassie Erasmus to “take action” against Zeenat Simjee

According to the publication, Iva sent “proof” of the affair to Rassie – in the form of screenshots of text messages. Iva claims the texts alleged that Elton’s affair with Zeenat has been ongoing throughout various team matches.

One of the screenshots includes a reservation for a romantic boat ride at the Sydney Harbour – allegedly before the Springboks vs Australia test match on 3 September.

Others show hotel and flight bookings for two. In one of the messages, Zeenat tells Elton to “divorce” Iva, whom she describes as a “horrible woman”.

And on the agenda was the possibility that she may have to return home mid-tour.

A decision has yet to be made public.