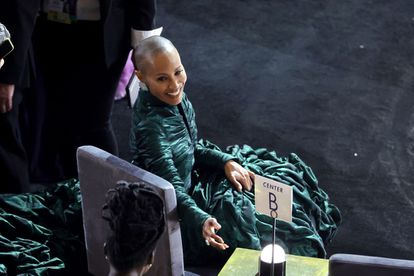 And the new angle – which emerged on TikTok – sees the wife of the King Richard star have a good chuckle at the exchange!

Will Smith courted controversy after he physically attacked the comedian following his “joke” about Jada’s bald head. Jada suffers from the auto-immune disease alopecia which leads to hair loss.

JADA’S REACTION TO WILL SMITH SLAP CAUGHT ON CAMERA

In the clip, which has since gone viral, Jada is seen in a side-profile clapping after Will Smith smacks the face of Chris Rock with his open hand.

After Chris quipped that: “Will Smith slapped the s*** out of me”, Jada is also seen laughing.

A voice over on the TikTok clip says: “Here is an angle that most people have not seen. Look at Jada’s reaction”.

The video was posted on Twitter by actor Michael Rapaport. He captioned the clip: “This is f**ked up”.

To add insult to injury for the Smiths, one tweep has recalled another “violent” moment by Will Smith.

The tweep posted: “Remembering the fact that Will Smith publicly admitted – on Red Table Talk – that he hit Jada on the head with a newspaper in front of their family because she cursed at him”.

Meanwhile, the majority of tweeps have expressed anger at seeing Jada’s response to Will Smith’s actions at the Oscars.

“Bizarre to have Jada Pinkett just laugh it off. She didn’t even look shocked”

“Why is Will’s disrespectful action funny to her?”

“Jada never moved a muscle to try to intervene. Then she laughs and acts like nothing just happened. Any rational, healthy woman would be embarrassed AF at Will’s decision to partake in violence on a f**king live tv show, but she’s cool. Both should be banned for life. #Oscars”

“Female narcissistic abuser caught on camera! Jada laughs when Will Smith attacks him. He is being coercively controlled and abused by Jada. She is an abuser”

Others however claimed that Jada’s actions were irrelevant and that she should not face any condemnation following her partner’s actions.

“Jada is not to blame one iota for this . Even if she has power over Will and his mental state or whatever”

“Here we are shaming a woman for men’s action”

“Explain to me how one man makes an offensive joke, another man commits assault, but somehow this is all the fault of the woman sitting quietly in her seat”