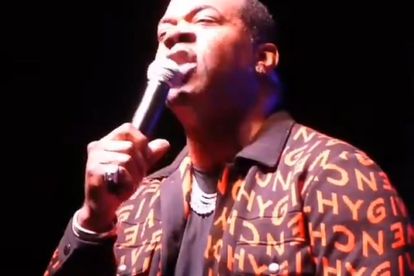 Busta Rhymes is outraged by the imposition of anti-COVID-19 preventative measures and he’s letting everyone know.

The rap legend went on the mother-of-all tirades against mask mandates during a concert in Missouri back in June and now a clip of the rant has gone viral on social media.

The 49-year-old, whose real name is Trevor George Smith Jr., was rather animated in his use of language and accused the government of trying to take away the “civil liberties” of citizens.

“It’s called the God-given right of freedom, right? No human being is supposed to tell you that you can’t even breathe freely. F*** your mask. … Some of y’all might feel differently, but f*** your mask,” he said.

Further elaborating on his disdain for mask-wearing, Busta Rhymes said they prevented him from “rhyming” and people from eating as well as “seeing each other’s smiles.”

“I come from a time where before I used to even want to holler at a chick. I used to have to do shit with my face to let her know that I’m into her. But all of that energy gets blocked when your mask is on. Energy is important, and we are all conductors of f***** good energy.”

It’s no secret that in the United States (US) a number of Democrat-run states have imposed all kinds of strict mask mandates, including in school, where the exercising of the usual measures has been encouraged. This includes wearing a mask, practicing social distancing and using sanitiser.

Despite the medical fraternity constantly stressing that it is the only way to eventually defeat the COVID-19 pandemic, some are keen on taking the life-saving advice.

At the end of his rant, Busta Rhymes apologised to the crowd for getting too political. While the clip is from two months ago, the rapper is now catching some heart over his comments.