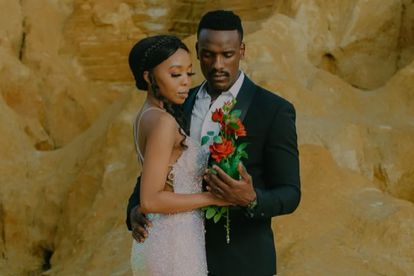 The Wife actor and his beautiful wife (who is also an actress) Lesego are in paradise after celebrating a year of marriage.  The young couple said their ‘I do’s’ on 13 March 2021 in a beautiful white wedding, and one year later they are still as in love as they were when they met at art school in 2013.

‘A YEAR OF BEING ONE WITH GOD’

March 13 is a very special day in the Khoza household because it is not only the couple’s wedding anniversary,  but also the day Bonko (Mqhele in The Wife) and Lesego (Lindiwe on Isono) started dating in 2013.

The voice-over artist and actor took to his Instagram to share a cute video of their anniversary photoshoot, with the caption of a Bible verse, thanking God for companionship.

“Today we celebrate one year of marriage sthandwa sam. A year of being one with God.”

“Two are better than one, Because they have a good reward for their labour. For if they fall, one will lift up his companion. But woe to him who is alone when he falls, For he has no-one to help him up. Again, if two lie down together, they will keep warm. But how can one be warm alone? Though one may be overpowered by another, two can withstand him. And a threefold cord is not quickly broken,” Bonko shared a Bible verse from Ecclesiastes.

HOW BONKO AND LESEGO KHOZA MET

The happily married couple, on YouTube show Defining Love, narrated their love story, revealing that it was love at first sight when they met.

“It was like an instant thing, like I knew this person is someone who will be in my life forever,” Bonko said.

“I walked her to the taxis one day and told her that ‘hey, I want to be your boyfriend tomorrow. I want us to wake up as boyfriend and girlfriend,” Bonko added.

Stage 6 loadshedding is over – for now