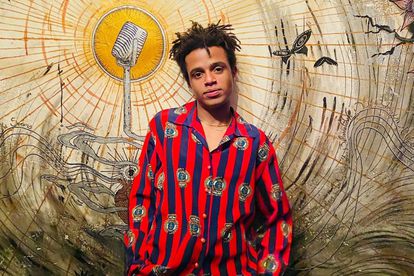 The son of the late Morning Live presenter whom he shared with widow Savita Mbuli, is all grown up and now a successful musician.

He is also studying towards a BA Politics and Philosophy at the University of Cape Town.

Rudy Chalmers released his debut album, Fears & Fantasies, last year. The 10-track album features a mix of upbeat songs dabbling in jazz, hip hop and soul, including one which pays homage to his dad Vuyo Mbuli.

Miss You – dedicated to the media veteran who died in 2003 – features a snippet of Vuyo interviewing Nelson Mandela.

He told TshisaLive of the track: “I hope that they can take away a little memory of both of those iconic SA figures, just by hearing their voices. For me, it’s so beautiful to hear my dad’s voice again like that.

“Hearing my dad speaking to Nelson Mandela is quite a lovely thing to hear and I hope that people will feel the same way when they listen to it because Mandela’s voice is so distinct, homely”.

Rudy also wrote the song Home in honour of his mother Savita and 23-year-old sister Siphosihle.

He said of the emotional song: “I am reflecting about being at home during the lockdown and reflecting on the pillars my mom and sister are in my life”.

WHY THE NAME RUDY CHALMERS?

The 21-year-old – who sports short dreadlocks – took on his dad’s middle name “Chalmers” as an ode to the late star.

In July, Rudy had a full circle moment when he appeared on Morning Live, the show helmed by his late father and co-presenter Leanne Manas, to promote his album.