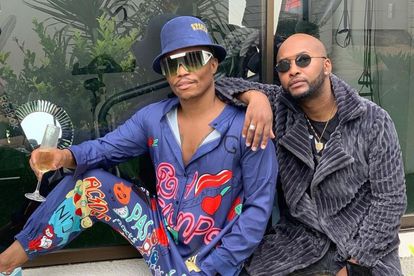 Vusi Nova took to the comments section of Somizi Mhlongo’s Instagram post to let the media personality know he missed him while he was away.

SOMIZI LANDS IN STYLE IN NAMIBIA

The former Idols SA judge jetted off to the southern African country of Namibia this past weekend to make an appearance at Steak House Pub & Restaurant in Walvis Bay.

Somizi landed in style — he was “dripping” in a Gucci throw over with matching Gucci socks and his luggage was Louis Vuitton.

“Touch down on the LAND OF THE BRAVE. Me and NAMIBIA have something in common….BRAVERY..,” he wrote on Instagram.

In another post, the media personality said that he was doing a book signing for Dinner at Somizi’s – I Am Not A Chef.

Speaking in Nama, Somizi said: “Namibia, I am here, I love you guys”.

“Andisakukhumbuli,” commented Vusi Nova, which means “I miss you” when translated to English.

Vusi Nova most likely wanted to join Somizi on his vacation, judging from the lavish “bestiecations” they’ve had this year alone.

In February, the pair hopped on a private jet to Cape Town, where they soaked up the sun in a luxury yacht around the ocean. The duo checked into the Delaire Graff Estate, a luxury lodge and spa located on the highest crest of Helshoogte Mountain Pass, in Stellenbosch which cost around R13 000 a night.

This was around Valentine’s Day. Therefore, fans and followers of “Somnova” thought they were more than besties. However, Vusi Nova has since denied dating Somizi.

The pair also took a roadtrip to the Kruger National Park where they checked into Kruger Shalati Lodge — a refurbished train on the Selati Bridge above the Sabie River.

“Somnova” also took a trip to Swaziland this year.

Another little “bestiecation” was the time they checked in to The Palazzo Hotel, in Fourways, to avoid drinking and driving.

The besties were inseparable, until the abuse allegations against Somizi from his estranged husband, Mohale Motaung, surfaced. Vusi Nova seemed to have distanced himself from the former radio presenter for a while before announcing their reunion.