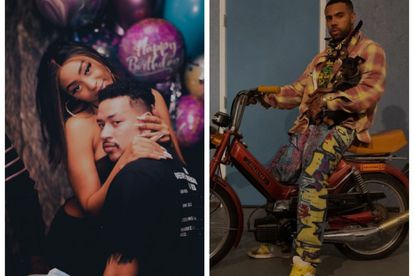 AKA did not miss the opportunity to tease his girlfriend, Nadia Nakai, about her ex-boyfriend, Vic Mensa (right), on IG Live. Image via @akaworldwide, @vicmensa/Instagram

AKA did not miss the opportunity to tease his girlfriend, Nadia Nakai, about her ex-boyfriend, Vic Mensa (right), on IG Live. Image via @akaworldwide, @vicmensa/Instagram

South African hip hop couple AKA and Nadia Nakai seem to have a happy and healthy relationship where their exes are discussed with no awkwardness or shame.

A few weeks ago, Mzansi saw the Not The Same rapper embracing her boyfriend’s baby mama, DJ Zinhle. And in a recent Instagram Live video, the Fela in Versace hitmaker was heard teasing his bae about her ex-boyfriend and American rapper, Vic Mensa.

AKA TO NADIA NAKAI: ‘VIC MENSA STILL LOVES YOU’

Nadia and the American hip-hop artist’s relationship was public knowledge in early 2021 — which was at the time AKA was dealing with his late fiance, Anele “Nellie” Tembe passing.

However, during an episode of Truth or Drink with Lasizwe Dambuza in August last year, the Naaa Meaan hitmaker revealed that she and Vic Mensa’s relationship had come to an end.

But AKA and some of Nadia’s fans will not let her forget about her ex. During their chat on IG Live, the couple were casually chatting to fans when one comment caught AKA’s attention. Failing to ignore it, he read it out loud:

IS THEIR RELATIONSHIP READY TO MOVE TO THE NEXT LEVEL?

Nadia Nakai and AKA made their relationship official earlier this year, even though they had been rumoured to be already together late last year.

Since then, fans have been treated to various images and videos of the couple packing on public displays of affection (PDA) as they can’t seem to keep their hands off each other.

Recently, Nadia revealed that she would love to have AKA’s babies after witnessing him as a father to his daughter, Kairo, who he shares with DJ Zinhle.

“We didn’t plan to become a couple, it just happened. I’ve witnessed how great he is as a father; of course, I’d love to have his babies one day,” Nadia was quoted as saying.

ALSO READ: ‘I’d love to have his babies one day’: Nadia Nakai gushes over AKA