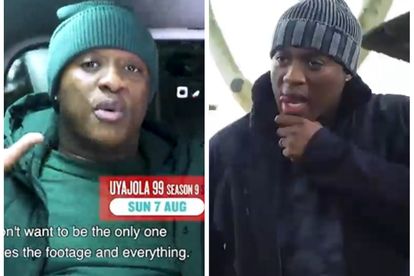 Jub Jub has announced the third season of ‘Uyajola 9/9’.
Image via Instagram
@official_jubjub

Jub Jub has announced the third season of ‘Uyajola 9/9’.
Image via Instagram
@official_jubjub

Jub Jub has had to face a barrage of abuse as seen in the trailer of the new season of Uyajola 9/9.

The Moja Love presenter announced that the new season of the popular reality TV show will air on Sunday 7 August at 21: 00.

Taking to Instagram, Jub Jub shared a clip of the new season of Uyajola 9/9.

In it, things look a little different than in the first two seasons.

Viewers will now be able to see footage of evidence presented to those who accuse their partners of cheating. Jub Jub has also substantially beefed up security and will have a fleet of bodyguards and cars.  The star will also be transported in a helicopter to catch cheaters in the act

And of course, there will be plenty of action with flying fists and angry encounters.

One thing that hasn’t changed on Uyajola 9/9 is the response Jub Jub receives from people he and his team catches cheating.

In the trailer, men and women are seen hurling insults at the star who was released from prison in 2017 on culpable homicide charges stemming from a 2010 accident.

“You love to gossip, you annoy me”

“You should have been locked up forever, get stabbed and died in prison”