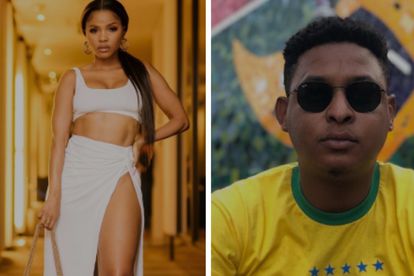 Khanya Mkangisa is all loved-up with her new man Desmond Williams. Image via @ilovekhanya, @desmond-williams-/Instagram

Khanya Mkangisa is all loved-up with her new man Desmond Williams. Image via @ilovekhanya, @desmond-williams-/Instagram

South African actress, DJ and presenter Khanya Mkangisa is in love again and she looks happy.

The Unmarried lead actress has had her fair share of drama when it comes to dating, leading to a lot of public scrutinies. But, it appears the club DJ has found herself a new love in Desmond Williams – the ex-husband and baby daddy of Mawe Vundla who is a socialite and model Tshepi Vundla’s sister.

ALSO READ: ‘Wow! The audacity’: K.O responds to claims he is dating Shekhinah

Khanya and her boyfriend Desmond have been seen all loved-up a few times. Videos of the couple cosying up together at a club and at home have since surfaced. In a pic shared by Desmond on his Instagram, the couple is seen out having lunch.

According to reports by controversial social media entertainment commentator Musa Khawula, Desmond is a father and divorcee. The clean technology developer is said to have ended his marriage to Mawe Vundla with whom he shares a daughter.

Mawe and Tshepi Vundla are the nieces of Generations: The Legacy creator Mfundi Vundla. Tshepi is in a long-term relationship with rapper Tabure Thabo Bogopa Junior (popularly known as JR) and the pair have two children together.

According to LinkedIn, Desmond is the CEO of Green Share, an Energy Services Company (ESCo) providing energy efficiency and renewable energy solutions to commercial, residential and industrial sectors.

Khanya is a former child star who is popularly known for being a YoTV presenter and her role as Akhona in The Queen.

In 2015, the media personality and fellow actor Matli Mohapeloa made their relationship official on Instagram. The former couple had been rumoured to be an item for quite some time when the Zabalaza actor announced it on the social media platform. They broke up in 2016 and were rumoured to be trying again in 2019, but it did not last.

The 34-year-old actress’ most-publicised and scrutinized relationship is with rapper J Molley. The two personalities set tongues wagging on social media when videos and snaps of them together went viral in 2020. Their 10 year age gap was the biggest talking point on the Twitter streets.

Khanya has also previously dated Utatakho rapper Yanga Chief in 2017 – fellow rapper Reason (also known as Sizwe Alakine in the amapiano world) allegedly confirmed the relationship in 2018. However, the actress denied it.

Other people Khanya has been linked to are Dream Team’s Trey, as well as presenter Tshego Koke.

ALSO READ: Out with the old: Khanya Mkangisa to star in ‘Unmarried’ season 3