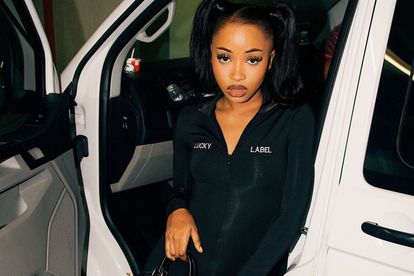 Over the last few months, South African celebrities have been showing off their expensive taste on social media. Stars like Shaun “MaMkhize” Mkhize, her son Andile Mpisane, Boity Thulo, and DJ Maphorisa have been wearing some of the most expensive designer clothes and appear to spare no expense when it comes to spending big bucks on clothes, shoes, and designer bags.

The latest local star to show out with pretty expensive designer items is popular DJ Uncles Waffles who is definitely on the come up in South Africa and abroad.

One of South Africa’s upcoming stars Uncle Waffles is definitely doing well for herself and her new fashion sense shows it.

The DJ was once criticised for being more of a dancer than a DJ but appears to be making big bank despite the negative comments about her craft.

In fact, she is doing so well that she recently got a shout-out from famous US rapper Drake who shared a snap of her on his Instagram stories.

It appears she isn’t only getting shout-outs from international celebs, but also securing international gigs which are allowing her to afford outfits that cost a cool R59 900.

ALSO READ: Youth Month: How to score an opportunity working with Uncle Waffles

While some people criticised celebrities’ need to wear designer labels and splurge on it, others were happy that Uncle Waffles is prospering.

“I have been amazed how much our so-called celebs spend on clothes amid the economic challenges in the black community. I have concluded, that we will never rise and be an economic power in this country. We will always be consumers of crappy feel-good second-class luxury products”

“Are they paying these shoes cash?.. 10 years later We will be doing a GoFundMe for uncle waffles just like we did to Zahara