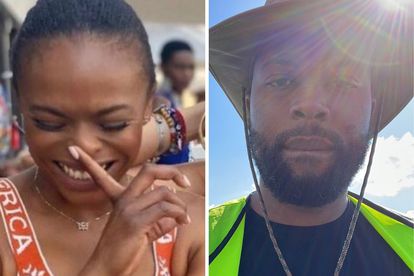 A year after getting Unathi Nkayi fired from her Kaya FM presenter post, South African social media users are calling Sizwe Dhlomo a “hypocrite” and a “bully” for doing the same thing to fellow radio star Mpho Maboi.

And Unathi is using the opportunity to throw major shade at her former colleague.

The afternoon drive presenter is trending on Twitter after it emerged that he had indirectly contributed to the dismissal of station manager Sibongile Mtyali. This, after he complained about Mpho’s tardiness on his show, whom Sibongile refused to take action against.

Ironically, Unathi called out Sizwe Dlomo last year for repeatedly being late to his show, which followed hers. But it was Unathi who was shown the door, following an internal investigation.

In a Twitter thread on Sunday afternoon, Sizwe Dlomo shared his version of events in what led to Sibongile’s sacking. According to the radio and TV star, it involved sports presenter Mpho Maboi, who was given a slot on Sizwe’s show, at the expense of a former employee.

He tweeted: “We had a great sports person in Sandile Van Heerden. Amazing guy who always pitched in with the rest of the team we had built to contribute to the rest of the show & station.

“Sibongile then called me into a meeting & said that Mpho would be joining the team, meaning that Sandile would leave & asked what I thought about that, I said: ‘No problem, I’ll work with whomever you give me’. No reason was given for Sandile’s removal”.

Sizwe then explained that he had introduced a daily team meeting, two hours ahead of his 15:00 show. Although attendance was mandatory, he claimed Mpho made it a habit of missing the meetings.

He continued: “Mpho started missing those, literally a week after joining our show. It meant she didn’t know what was being discussed, it meant she would sometimes not have a sports trivia prepped on air & that was jeopardising the quality of the show.

“So I spoke to her twice (on record) & when she continued, I went to her manager for him to address it. She then skipped her manager & called Sbo instead. I then asked why did you remove a person who obviously could deliver for someone who couldn’t?”.

He added: “Sbo’s response was ‘you will work with whomever we tell you to’. Again I asked ‘if everyone else can make the meeting, what makes this newcomer to our team so special?’ (again, I have all of this on record)…”

Sizwe then claimed that HR requested he move the meeting to “accommodate Mpho”. But he wasn’t having it. He continued: “I reported that directly to the board, copying both Sbo & HR. The board launched an investigation, staff members came forward to testify & I suppose this is the outcome of it”.

Neither Sibongile nor Mpho Maboi has yet to respond to Sizwe’s claims.

Meanwhile, tweeps used Sizwe’s Kaya FM drama to remind him of a similar incident that transpired exactly a year ago, this time involving Unathi Nkayi.

According to Unathi, Sizwe Dhlomo – whose show followed her lunchtime slot – was repeatedly late to report on duty.

This led her to confront him and later address the matter with HR. But unlike Sizwe’s case with Mpho Maboi, things turned ugly for Unathi.

Sizwe claimed that Unathi accused him of verbal abuse and being “unprofessional”, a claim he vehemently denied. Sizwe even brought receipts in the form of audio clips and screenshots of internal emails.

As a result, Unathi’s contract was terminated with immediate effect by Kaya FM who issued a statement on their “intolerable” relationship.

The drama between former friends Unathi and Sizwe continued to play out on social media, with the former accusing Kaya FM of “silencing” her.

WHO IS HAVING THE LAST LAUGH? UNATHI THROWS SHADE…

Following Sizwe Dhlomo being dragged on Twitter for being behind two female Kaya FM employee sackings, Unathi shared her own thoughts in a cryptic Instagram post.

Sharing a meme-worthy pic of her and bestie Melanie Bala laughing, Unathi added several telling emojis: A pair of eyes, a laughing-crying face, and a pair of clapping hands.

And her followers knew exactly what she was referring to:

Iamzethu02: “I need your speed dial to the higher power”

Athyqinela: “it seems like you are having the last laugh”