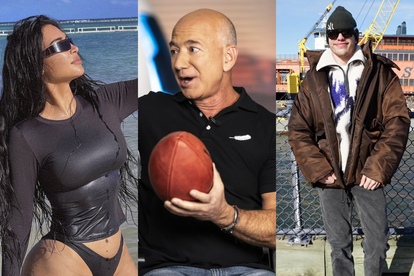 Reality TV star and model Kim Kardashian and her young comedian beau Pete Davidson are rubbing shoulders with the world’s rich and famous. The two were recently spotted dining with Amazon boss Jeff Bezos at his LA home.

Meanwhile, Juliye – Julia Fox and Kanye – have been wowing social media users with their interesting and eye-catching fashion choices.

Kim Kardashian appears to be dead serious about moving on from her musician husband Kanye West who had been begging her to come back to him for months before she made things official with comedian Pete Davidson.

While it seems Kanye has finally given up on his dream to reunite with his superstar wife, she appears to be moving on to bigger and better things.

TMZ reports that the oldest Kardashian sister and her young lover Pete were spotted going out to Jeff Bezos’ LA compound to enjoy a nice and cosy dinner.

The pair then retired to Pete’s Beverly Hills hotel together.

Just days before that, the 41-year-old model was spotted having coffee with Hillary and Chelsea Clinton at a coffee shop called Hot & Cool Cafe in Canoga Park.

The trio was reportedly working on “Gutsy Women,” an Apple TV+ series that is being headed by Clinton.

Meanwhile, Kanye and his new love Julia Fox are working hard to turn heads and have been captured spending a ton of time together.

Julia recently also slammed rumours that she was dating super-rich Kanye for his money by explaining that she has been dating billionaires for almost her entire adult life.

The actress was recently spotted celebrating her son’s birthday with her ex present but took some time to let Kanye know she was thinking of him by sharing a sultry snap.

ALSO READ: Not just a rebound? Julia Fox shares sexy snap of her and Kanye