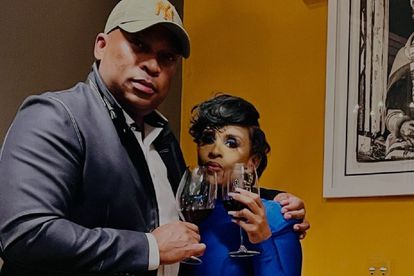 ‘Real Housewives of Durban’ viewers can’t seem to get over the idea of Nonku Williams and Robert Marawa possibly dating. Image via @nonkuwilloiams/Instagram

‘Real Housewives of Durban’ viewers can’t seem to get over the idea of Nonku Williams and Robert Marawa possibly dating. Image via @nonkuwilloiams/Instagram

Real Housewives of Durban (RHOD) star and businesswoman Nonku Williams has her fans rooting for a relationship between her and sportscaster Robert Marawa.

The two stars were seen looking rather cosy during a night out at the weekend, with the A2B Winery founder also sharing some snaps of the two of them together on different occasions.

NONKU AND ROBERT MARAWA OUT AND ABOUT

The reality TV star and entrepreneur who is in the logistics industry has been sharing snaps with the radio broadcaster on her Instagram. This has sparked dating rumours, which fans love.

A video of both Nonku and Robert has also been doing the rounds on Twitter and it shows them during a night out, sipping on some wine. The viral video raised many eyebrows for the fact that the two rumoured lovebirds lock arms as they drink their wine – which is considered a cosy gesture between couples.

The video that sparked dating rumours was shared by controversial social media entertainment commentator Musa Khawula who did not do any speculating on the couple’s relationship status.

Nonku (42) has lamented about being single on a few occasions in season two of RHOD. At some point, during their vacation in Sun City, she asks one of the other wives, Sorisha Naidoo, to find her a man.

Ms Williams, as she is also called, has opened up a few times about her ex-husband whom she alleges she divorced because he was physically abusive. The pair have two boys together. Prior to being with him, she was in a relationship with the late Sfiso Ncwane who is the father of her only daughter, Nothile.

On the other hand, Robert Marawa (49) dated actress Pearl Thusi. Their first public appearance as a couple was at the annual Vodacom Durban July in 2016, but they broke up in 2017. The Rise FM and Vuma FM sports presenter has a son with former Generations: The Legacy actress, Zoe Mthiyane.

ALSO READ: ‘Wow! The audacity’: K.O responds to claims he is dating Shekhinah

TWEEPS WANT THIS SHIP TO SAIL (IF IT HASN’T ALREADY)

Following the video, Twitter has been abuzz. Nonku’s fans want her to finally find love and hopefully live happily ever after. They are also hoping to see Robert in the third season of the Showmax reality show.