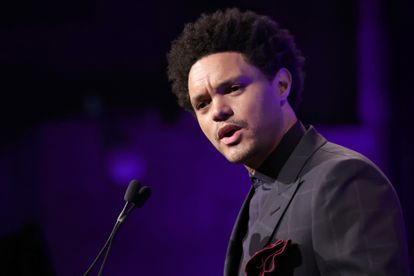 Trevor Noah has appealed to viewers of The Daily Show to donate towards to KZN floods disaster relief facilitated by Gift of the Givers.
Image via Jamie McCarthy/AFP

Trevor Noah has appealed to viewers of The Daily Show to donate towards to KZN floods disaster relief facilitated by Gift of the Givers.
Image via Jamie McCarthy/AFP

Like many other South Africans, Trevor Noah is appealing for financial assistance to help the families affected by the devastation caused by the KwaZulu-Natal (KZN) floods.

And just like other South Africans too, the comedian is asking for money to be donated to the humanitarian organisation Gift of the Givers.

The Daily Show host made the plea during a segment of his show, in which he directed.

Speaking during a clip of the show, Trevor Noah brought awareness to the plight of his people back home.

He said: “Nearly 4000 homes have been destroyed and more than 40 000 people have been displaced by the floods happening in South Africa.

“Gift of the Givers is a South-African based disaster-relief organisation that is on the ground helping those people who are affected by the floods”.

Trevor encouraged viewers to donate to the NGO, which he claims “acts fast and to save lives”

He added: “Anything you can give will help”.

CHARLIZE THERON DOES HER BIT TOO

Trevor Noah is not the only SA star to come to the aid of victims of the KZN floods. Actress Charlize Theron is also doing her bit through her charity – the Charlize Theron Africa Outreach Project (CTAOP).

Sharing pics of the devastation on her Instagram page, Charlize wrote: “My home of South Africa is going through an extraordinarily difficult time and while I know much of the world is in pain right now, and a lot is being asked of us as global citizens, I’m hoping you’ll find it in your heart to help”.

ALSO READ: Let’s be direct: Trevor Noah on difference between US and SA racism

With partnerships with the Kolisi Foundation – headed by celeb couple Siya and Rachel Kolisi – Charlize’s charity has managed to feed and temporarily home families displaced by the KZN floods. They’ve also assisted in disaster relief like clearing roads, repairing homes, and cleaning up schools.