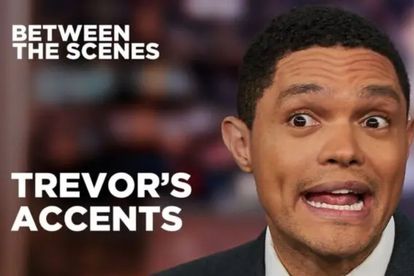 A new compilation of the South African comedian and The Daily Show host, Trevor Noah‘s accents recently went viral and Mzansi is loving it.

The video, which was taken during a behind-the-scenes taping of Trevor’s talk show, refers to him as the G.O.A.T. (Greatest Of All Time) when it comes to accents. SAPeople also shared the video, in which Trevor masters French raps, Donald Trump speaking Arabic, emergency operators in South Africa and the Aussie accent.

In the clip, Trevor also revealed how his love for accents came about through growing up with so many accents around him (his mom being Xhosa and his dad German Swiss), and remembers how he used to watch Rescue 911, starring William Shatner, on TV with his mom as a child.

“I have a mixed family, everyone in my family has a different accent,” he explains.

Trevor says he never tries to learn the accent of a country – since there is no one accent – so much as learning the accent of a friend from the country. His own accent is now helping some foreigners learn how to identify a South African accent.

His favourite | Going on vacation

When asked what his favourite is, he says it depends on the day.

“This guy is just brilliant…there’s no other way to put it!” social media users quipped on YouTube saying that the whole clip is essentially a special on accents.

“Trevor speaks different dialects, with the proper accent. It’s a beautiful thing. It just takes a few words in another’s language to make a connection.”

Watch | The Daily Show Between the scenes