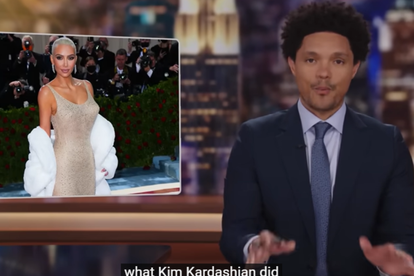 Trevor Noah has slammed Ripley’s Believe It or Not fo alowing Kim Kardashian to wear Marilyn Monroe’s dress. Image via via YouTube: The Daily Mail

Trevor Noah has slammed Ripley’s Believe It or Not fo alowing Kim Kardashian to wear Marilyn Monroe’s dress. Image via via YouTube: The Daily Mail

Reality TV star Kim Kardashian has been getting a lot of flak for wearing Marilyn Monroes dress to the Met Gala in May this year. The latest person to chime in on the trending topic is South African comedian Trevor Noah.

The US-based media personality shared his opinion on the matter during an episode of The Daily Show and let’s just say, he isn’t impressed with Kim or the people at Ripley’s Believe it or Not.

Thousands of social media users expressed outrage after Kim Kardashian announced that she would be walking the Met Gala red carpet in the dress singer and actress Marilyn Monroe wore to sing Happy Birthday to president John F Kennedy.

The dress had been in the possession of Ripley’s Believe it or Not prior to its short walk down the red carpet.

A few weeks after Kardashian wore the fragile dress, it was reported that it had been damaged by the Keeping Up With The Kardashians star.

Ripley’s vehemently denied this claim but this did not stop Trevor Noah from weighing in.

According to Trevor Ripley’s is mostly to be blamed for the damaged dress.

“It was they who lent the dress to Kim,” commented Trevor during latest episode of The Daily Show.

He continued, “Kim obviously took a big risk and it backfired, however, Ripley’s still deserves most of the blame as they own the dress and in charge of preserving it. So, if they told her it was okay to wear it, that’s on them.”

He didn’t however completely excuse the 41-year-old beauty mogul – calling her out for her “poor judgement”. He also added that she could have worn just about anything to the event.

“The Marilyn Monroe dress is a one-of-a-kind piece of American history,” he said. “The Met Gala happens every year. People dress like hamburgers there. You could have worn anything else,” he quipped.

Trevor continued, “If you are entrusted with a piece of American history, you better do everything you can to take care of it.”

In true Trevor style he also joked that he would probably be tempted to kiss the Mona Lisa portrait in a selfie if the Louvre gave him the opportunity to do so.