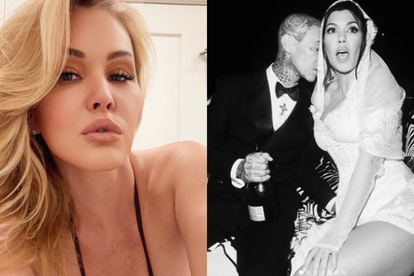 It appears the time has finally come for Travis Barker’s ex-wife Shanna Moakler to move on and get rid of the wedding band she wore while married to the musician. Earlier this week the model, who shares two kids with Barker, announced that she was auctioning off the ring and hopes to get at least $120 000 (R1.8m) from the sale.

This comes only a few weeks after Barker’s Italy wedding ceremony to Keeping up With The Kardashians star Kourtney Kardashian.

While newlyweds Travis Barker and Kourtney Kardashian celebrate their marriage, his ex Shanna is finding a way to both move on and cash in from the breakup.

The model and former Celebrity Big Brother star is auctioning the ring she wore while married to Barker.

The pair married in 2004 and had two children, son Landon Asher Barker and daughter Alabama Luella Barker before eventually divorcing in 2008.

ALSO READ: Before Kourtney, there was Shanna: Throwback pics of Travis Barker & ex

Meanwhile the ring is being sold on jewellery resale platform Worthy.

It is a Cartier platinum ring and features a central 4.01-carat solitaire-cut diamond surrounded by smaller 1.04-carat stones.On Saturday last weekend, the ring was already on $70k (R1m).

This is more than half of the $120k that Shanna is hoping to get for it.

Speaking to US weekly, she said that she made the decision to sell because that part of her life is over. She also added that once upon a time, the ring was the wedding ring of her dreams but it’s time to move on from that.

This comes shortly after Barker married Kardashian a lavish ceremony surrounded by close friends and family in Italy earlier this month.