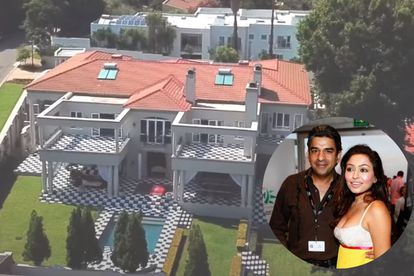 A Top Billing episode that aired in 2019 has made life harder for the Gupta family and their close associate Iqbal Sharma and his wife, Tarina Patel.

This comes after the National Prosecuting Authority (NPA) seized more than R47 million’s worth of Gupta-linked assets.

Investigator Thesele Rankuoatsana appears to have helped the authorities track down at least R500 000 worth of moveable assets. Some of the items included furniture, jewellery and Sharma and Patel’s R12 mansion in Sandton, reports The Citizen.

Inside Tarina Patel and Iqbal Sharma’s

These assets (and the couple’s tango dance) has since made headlines as the Investigating Directorate (ID) honed in on the couple’s Persian carpets, furniture imported from India, a 3-series BMW and property worth millions showcased on the popular television show.

Now, South Africans are seemingly very interested to take an inside look at the lavish property dubbed a “stunning Indian palace”.

“During the TV show, Ms Patel-Sharma hosts the presenter of Top Billing, and takes him on a tour of the house in which she identifies several valuable movable assets and or furniture, and during which she makes three lavish outfit changes, including jewellery,” read the affidavit from Rankuoatsana.

TimesLive reports that his and her walk-in closets containing jewellery and clothing from bespoke designers such as Versace was also featured on the show.

Top Billing itself showcased some of the more antique pieces in the house which are believed to be four hundred years old. At the time, Patel complimented them with a range of her own creations, like gold-detailed hand-sewn pillows she designed individually herself.

What’s more, peeps could also take a look at dark wooden arches in the lounge which were previously in Indian palaces.

Watch the full tour of the mansion over here: