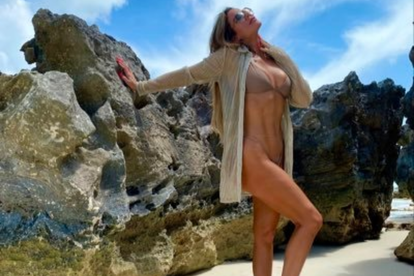 Khloe Kardashian is being dragged for her sexy posts. Image via Twitter: @KhloeKardashian

Khloe Kardashian is being dragged for her sexy posts. Image via Twitter: @KhloeKardashian

Reality TV star Khloe Kardashian has been slammed as “tone deaf” after she headed to her Instagram page to post some saucy snaps of herself. Her post comes only three days after eight people were killed at her brother-in-law Travis Scott’s Astroworld concert.

Keeping Up With The Kardashian star Khloe Kardashian has been accused of being unable to read a room after she shared some racy snaps on her social media pages.

Many have slammed the TV star for being “uncaring” since the post comes only a few days after tragedy struck at her sister Kylie Jenner’s fiance’ Travis Scott’s Astroworld Festival.

Eight people including one minor were left dead after a crowd of around 50 000 people rushed over to the stage when Travis started performing at 21:00 on Friday 5 November this year at the NRG Stadium in Houston Texas.

Taking to Instagram, Khloe showed off her curves in a sheer figure-hugging dress but instead of the usual millions of likes, she was hit with a ton of comments from social media users who seemingly had to remind her that people had died only a few days ago.

No condolences? reality TV star gets brought back to reality

While Khloe hadn’t attended the event and couldn’t possibly have done anything to prevent the tragic events from occurring, many people expected her to be a lot more remorseful especially since she’s a public figure related to those who were involved in the Astroworld tragedies.

“Tone deaf. Shame on you for real.”

“Are you kidding me?”

Khloe has since reshared a post made by sister Kim Kardashian in which she offers her condolences to the families of those who lost their lives at the event. See the post below:

Meanwhile, Kylie Jenner has also faced a lot of backlash regarding the tragic turn of events. While many slammed her for recording ambulances at the event, others have now come out to call her out for what they believe is “bad parenting”.

According to many tweeps, Kylie should not have been at the concert with three-year-old Stormi.