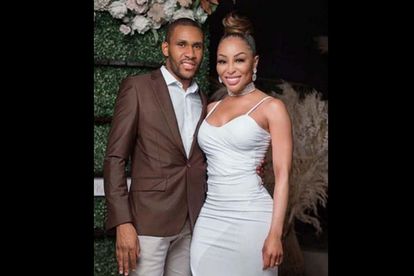 Actress Khanyi Mbau and her businessman boyfriend Terrence Kudzai Mushonga’s relationship has taken centre stage during the past week, pushing Somizi Mhlongo and his estranged husband’s abuse allegations saga and divorce aside.

Khanyi Mbau made headlines on 31 August, when her boyfriend claimed she was missing while on vacation in Dubai. However, she was on a flight back home to South Africa without telling Kudzai Mushonga which led to him going Instagram live and airing their dirty laundry online. The actress has since apologised for stressing the country out and Kudzai has apologised to her, taking responsibility for the reason she left.

Here is a timeline of Khanyi Mbau and Kudzai Mushonga’s short but explosive relationship.

Although the Red Room actress did not share when she began dating Kudzai Mushonga, the pair went “Instagram official” in early February when Khanyi posted a picture of herself at the passenger side of Kudzai’s car.

The relationship was instantly under public scrutiny when it was alleged that Kudzai was a fugitive and said to be on the Zimbabwean police’s wanted list.

Soon after the Happiness Is A Four-letter Word actress hinted that money is a very important aspect for her in relationships.

“The thing is with my relationships I treat them like how I buy a car or a house … you know what you want in the house. I know what my requirements are and I’m not going to back down,” said Khanyi Mbau in an interview with Kaya FM.

Later that month, Khanyi Mbau posted a picture to her Instagram where she is seen donning a gold ring on her left finger, which led fans to question whether the pair secretly got married.

Kudzai also dropped marriage hints when he said he was willing to pay R1 million lobola for the actress.

ALSO READ: Are Khanyi and Kudzai secretly married? Here’s why we think so…

In the middle of March, Khanyi Mbau shocked fans when she posted a swimsuit snap and it looked like “Kudzai” was tattooed on her thigh.

Kudzai also revealed that he has a tattoo of Khanyi’s name on his chest over a recent Instagram live session.

Also in March, Khanyi’s brother, social media star Lasizwe Dambuza publicly announced that he approves of his sister’s relationship with the Zimbabwean millionaire, via his Instagram stories.

“This is real love! I’ve never seen my sister so happy and content,” said Lasizwe adding that their relationship made him “want to believe in love again.”

In the middle of August, Khanyi and Kudzai posted snaps of themselves living their best soft lives as they went on a “baecation” to Dubai. However, this was the calm before the storm.

The pair appeared to be happy and in love. However, this quickly changed when Kudzai revealed that Khanyi went to the salon and did not return for hours. He then jumped to the conclusion that she is missing.

While her boyfriend was “illegally losing his mind” looking for her, Khanyi Mbau was already on a flight back home to Johannesburg, where she was greeted by her brother Lasizwe and seemed to have went straight to visit her late father’s grave.

Khanyi Mbau is yet to reveal what made her leave Dubai so quickly and without letting her boyfriend know but Lasizwe dropped a hint in the comments section of one of Kudzai’s Instagram live videos.

“Not everything is about you, DO REMEMBER WHAT HAPPENED THAT MORNING!! You don’t want me to go there!! Stop this!!,” wrote Lasizwe in the comments section of Kudzai’s previous live video.

Kudzai has since held three Instagram live sessions. The first Instagram live was before he found out Khanyi was in South Africa. In the second live session the businessman revealed that he set up Khanyi with a business in Dubai and paid around R80 000 for her daughter to stay in a “nice place” while they were away.

In the third Instagram live session Kudzai got emotional and apologised to Khanyi and asked other “gents” to “take notes” as he detailed what he thought went wrong in Dubai.

In other related news, Khanyi Mbau has finally made it to the salon!