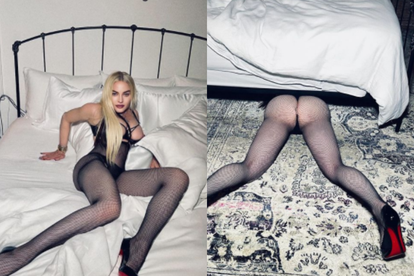 Madonna has received a lot of backlash for these IG photos. Images via Instagram: @madonna

Madonna has received a lot of backlash for these IG photos. Images via Instagram: @madonna

Iconic artist Madonna has always been known to be a sex symbol. But judging by many people’s reactions to her latest Instagram offering – many people expected her to slow down as she got older. This is clearly not what she has planned after heading to the app to post some pretty raunchy snaps of herself.

Madonna flashes a little nipple and booty on IG!

63-year-old singer Madonna has once again managed to upset social media users with her often extreme behaviour. The mom of six recently got in trouble after recreating Marilyn Monroe’s death in a photoshoot for V magazine. She was also severely slammed for writing that some of the people who worked on the shoot did not get paid.

She then left viewers shook after flashing her bum on The Tonight Show while expressing how she really wants to “disturb the peace.”

It seems she is quite serious about that especially after her latest post where she decided to share a number of snaps of herself looking all sorts of sexy.

In one of the snaps, she shows her nipples in a see-through lace bra while in another she flashes her fishnet covered booty.

“Angel watching over me,” she captioned the series of risqué photos.

As expected, the comment section was quickly filled with comments from people who absolutely loved it or thought it was wildly inappropriate. Here are some of their comments:

“Why babe why? You are so much better than this.”

“Please stop photoshopping your face that much you don’t need that.”

“What happened to you?”

Not everyone hated the photos though and were singing her praises. A lot of them marvelled at how gorgeous she looked while others advised her to “ignore the haters”.

ALSO READ: Madonna teases that her ‘Madame X’ doccie could end up on OnlyFans