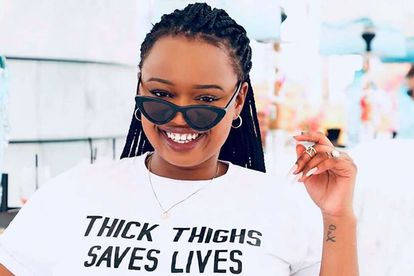 South African influencer and content creator Thickleeyonce is not one to sit back while people say nasty stuff about her. Controversial Twitter user and former entertainment manager Nota Baloyi has learned this the hard way after he decided to drag her into a tweet while bashing American rapper Cardi B.

Not letting it slip, Thickleeyonce quickly put Nota in his place and many South Africans absolutely loved to see it.

Nota Baloyi is always shooting strays on Twitter – even though his endless rants have come back to bite him more than once.

This time the 38-year-old headed to the app to share his thoughts on Cardi B and dragged Thickleeyonce in it while he was at it.

“If I smashed Cardi B, I’d deny it… She’s no different from Thick Leeyonce to me,” trolled Nota earlier this week.

The post did not sit well with Thickleeyonce who quickly reminded him that he was unlikely to ever “smash” her or Cardi B.

She also advised him to lower his standards if he ever hopes to get smashed by anyone.

“You think I’m a baddie like Cardi B? Thanks. Lol! Also, lower your standards, you’d never smash either of us.”

She also went in to write:

“I hate when men think fat women are desperate & don’t have standards when it comes to dating. What a joke.”

Many people loved that she had stood up for herself while others continued trolling her.

Others resorted to calling Nota names and throwing insults at him.

“It’s the fact that he thinks he stands a chance with either one of you.”

“He is such a bully”