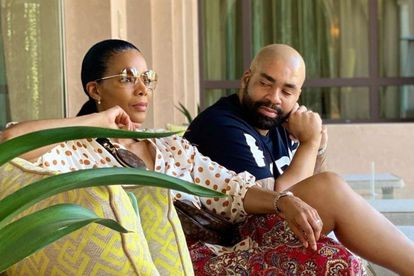 Veteran actress Connie Ferguson shared a clip of her warm welcome back to the set of The Queen, posted to Instagram on Friday 10 September.

‘A PURPOSE BIGGER THAN YOURSELF’ SAYS CONNIE

Connie Ferguson has returned to her role of Harriet Khoza on Mzansi Magic’s The Queen after taking a break following the death of her husband, Shona Ferguson. Veteran actor and film producer Shona Ferguson, affectionately known as “Uncle Sho” passed away due to the COVID-19 related complications on 30 July at the age of 47.

The death of Shona Ferguson was heartbreaking for many South Africans who grew up watching him on screen. This was a drop in the ocean of saddness compared to the pain his wife, Connie Ferguson has endured. The Kings of Jo’Burg star’s death was just a day before he and his wife would have celebrated 20 years together.

Shona and Connie Ferguson established their own TV production company together called Ferguson Films in 2010 which serves as the production house to popular soapies Rockville and The Queen. Connie Ferguson had taken some time off from her role on The Queen to mourn the death of her beloved husband.

In a recent post, she shared her warm welcome back to the set which she feels is for a bigger purpose than her own.

“Team #thequeen #fergusonfilms. I love you all so much! Thank you for today.???????? It’s good to do what you love knowing it’s for a purpose bigger than yourself,” she continued.

In a video which racked up over 140 000 likes, Connie Ferguson shared a clip of balloons, gifts and flowers that she received from The Queen team.

“I’m grateful that we continue to walk this journey together, and all our wins and victories are to the glory of the almighty God. In the name of our Lord Jesus Christ,” she added.

In August, Connie Ferguson’s character Harriet Khoza fell in love with her arch enemy Hector Sebata, played by Rapulana Seiphemo. This left fans concerned over the pair’s romance and if Connie would return at all. Harriet is the matriarch of her family and many storylines centre around her. Tweeps sincerely missed her during her time away.

The Queen director Wandile Magadla said that he knew everything would be alright with the telenovela as soon as she stepped back on set.

“The minute you walked onto set, we all knew that we gonna be alright. Welcome back diMazo @connie_ferguson,” wrote Magadla on Instagram.