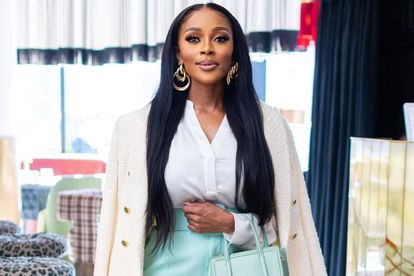 South African musician, actress, and TV personality Thembi Seete is consistently praised for her killer looks and drama-free lifestyle. The gorgeous Idols SA presenter is always finding ways to stay relevant and has managed to do so since her days as a Boom Shaka member. While it appears South Africans can’t get enough of her, one thing they don’t appreciate is her dance moves.

Many of them have shared hilarious comments about Thembi’s moves after watching her break it down on her popular TikTok page – this hasn’t stopped her from sharing as many as she likes.

Years ago, Thembi Seete used to rock the stage while singing in the kwaito group Bongo Muffin.

Years later and she still manages to wow crowds with her timeless beauty and chilled personality.

While everyone absolutely loves Thembi and always takes some time to tell her that – they don’t all appreciate her dance moves anymore.

In a clip that has since gone viral after it was reshared from her TikTok page to Twitter, the former Gomora actress can be seen dancing to Rema and Selena Gomez’s song Calm Down.

“Bathong Boom Shaka,” it was captioned by @Kulanicool who shared it.

Soon many headed to the comment section to laugh at Thembi’s lack of moves.

Many of them joked that she was getting too old for the dance floor.

Others however defended her moves and said she just needs a little practice.

“How have I not noticed all these years ba she has two left feet. I still love her though.”

“She must rest, just now she shifts a bone.”