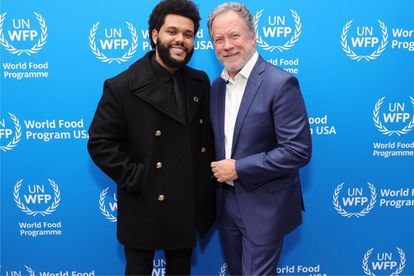 The Weeknd and David Beasley. Image via Twitter @WFPUSA

The Weeknd and David Beasley. Image via Twitter @WFPUSA

The Weeknd has been made a Goodwill Ambassador for the U.N.’s World Food Programme.

The Blinding Lights hitmaker had recently donated $1 million (R14.9 million) to the food-assistance branch of the United Nations towards relief efforts in Ethiopia, amid their humanitarian crisis.

THE WEEKND’S AUTHENTIC PARTNERSHIP WITH THE U.N

The 31-year-old star – whose real name is Abel Tesfaye – is set to use his platform to raise awareness of world hunger.

“The U.N. World Food Programme is doing urgent and important work to change and save lives on a daily basis and I feel passionately about addressing world hunger and helping people in need. Our partnership is an authentic extension of all our efforts and intentions to help those in need and bring an end to so much suffering,” he said in a statement.

Last year, The Weeknd donated $300,000 (R4,4 million) to victims of the devastating explosion in Beirut, Lebanon.

The Starboy hitmaker made a generous donation to citizens of Lebanon’s capital city who were affected by the shocking blast in a warehouse in the city in August 2002, which killed over 200 people, and left more than 6,000 people injured.

THE WEEKND’S DONATION TO LEBANON

The Weeknd’s funds helped people who were injured, people whose loved ones died, and people who were left homeless by the tragic explosion, and were split between the World Food Programme, the Lebanese Red Cross and the country’s Children’s Centre.

The singer’s manager, Wassim ‘Sal’ Slaiby, and his wife, Rima Fakih, led the charge to get relief for the people in Lebanon, which prompted the Canadian star to get in touch with Global Aid to make the generous donation.

And last month, The Weeknd was honoured with the Quincy Jones Humanitarian award at the first annual Music in Action Awards.

The Take My Breath hitmaker was among the honourees at the Black Music Action Coalition (BMAC)’s event in West Hollywood in recognition of the fact he’s donated several million dollars to various good causes since the coronavirus pandemic began.

Other organisations helped by the Earned It singer are Black Lives Matter Global Network, the Colin Kaepernick Know Your Rights Camp Legal Defense Initiative, and National Bail Out, as well as Covid-19 relief campaigns for MusiCares, in his hometown of Scarborough, Ontario.