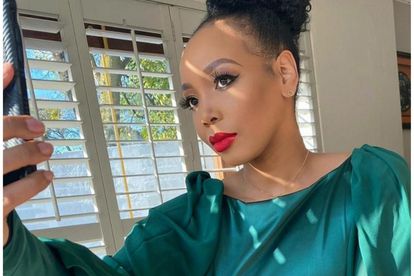 Media personality Thembisa Mdoda-Nxumalo surprised her followers yesterday (4 August) when she took to her social media account to reveal that she is in hospital fighting for her life.

Thembisa took to her Instagram Stories after Shona Ferguson was laid to rest and shared that she was fighting for her life.

My kid feeling my grief and comforting me, on the phone today, knowing very well that I’m also fighting for dear life on this hospital bed.

What a heavy day.

At my most vulnerable, I actually don’t have the strength for anything else.

Time to break away. Stay safe everyone.

Love your loved ones. Love them hard.

Neither the actress nor her media personality sister Anele Mdoda have revealed the reason she’s hospitalised at the moment.

The TV presenter and actress was announced as Zandile Msutwana’s understudy in April for the role of Vuyiswa Maake on The Queen.

She temporarily replaced Zandile Msutwana, who got injured on set and had to take a break for a few months to nurse her injuries.

Msutwana reprised her role on Monday 2 August when season six of the show began to air after nearly three months off the show.

Fans frequently requested Msutwana’s return as they compared Mdoda-Nxumalo’s depiction of the character to that of the original Vuyiswa.

Msutwana announced her return on her social media channels a month ago and told her followers that she was thrilled to return to the set.

She also told Sunday World that it was harder being at home with her biggest challenge being mobility and assistance around the house.

Mdoda-Nxumalo took to her Instagram account to pay tribute to The Queen actor and producer Shona Ferguson who was laid to rest on Wednesday 4 August.