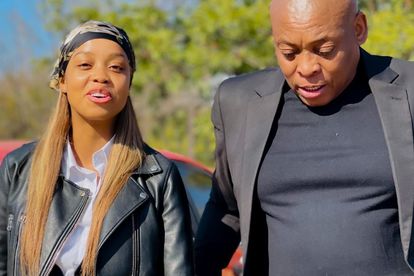 It appears not every actor from The Queen is mourning the death of producer Shona Ferguson who co-created the popular soapie with his actress wife Connie Ferguson.

Shona passed away at the age of 47 on Friday 30 July at the MilPark Private Hospital, in Johannesburg, due to COVID-19 complications.

The Ferguson power couple came under fire several times for allegedly firing actors from the show throughout the years.

The Queen has lost major cast members, such as Rami Chuene, Loyiso McDonald and Dineo Langa, in recent months and it seems they are still holding serious grudges towards the Fergusons.

Actress Ntando Duma who recently exited the show, is an exception to the list as she posted images of herself at Shona’s funeral with her on-screen father, Rapulana Seiphemo (Hector Sebata).

Her on-screen sister Jessica Nkosi, who plays the role of Thando Sebata, re-tweeted Shona’s funeral on her social media channels.

Fans of the show noticed that four former actors — Dineo Langa who played Kea Khoza; Rami Chuene who played TGom Mabuza; Loyiso McDonald, who played Kagiso Khoza; and Motsoaledi Setumo who played Mabatho Mabuza on The Queen — never uttered a word about his passing or his funeral service on their social media accounts.

Viewers of the show are complaining about former The Queen actress Rami Chuene’s silence over Shona’s death and funeral. The actress played the character of Gracious Mabuza and is close friends with Dineo Langa and Loyiso McDonald.

She announced her departure from the show last year and left many fans devastated and disappointed.

Unfortunately, I won’t be getting into details as advised by my legal team.

I still have to finish shooting and I’m hoping to execute as excellently, exceptionally and professionally as I always have.

Popular actor Loyiso MacDonald who played the role of Kagiso Khoza bid farewell to the show for the theatre stage this year.

Loyiso, who has starred on the show since its first season has also not uttered a word about the late Rockville actor on his Twitter account.

Former The Queen actress Matsoaledi Setumo who played the role of Mabatho has also puzzled her followers by not paying tribute to the late Ferguson Films creator.

The actress seemed to not have issues with the Fergusons and even previously told her fans that she wasn’t fired from the show when they assumed she was fired.

It’s time to broaden my horizons.

It might not be 9 pm but you’ll definitely see me soon.

The actress who got her acting break on The Queen where she played the role of Kea Khoza for more than four seasons shook her followers on Instagram last year when she finally confirmed allegations that she was axed from the show.

When a fan asked her when she’s returning to the telenovela Dineo commented on Loyiso MacDonald’s post:

Ang’buyi mina ngaxoshwa (I am not coming back, I was fired).