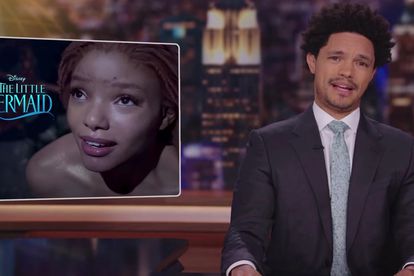 Following the widespread backlash in reaction to Disney’s trailer of The Little Mermaid live-action remake, fans are expressing their disgust at racist remarks about the film and its lead actress Halle Bailey, and South Africa’s Trevor Noah is one of them.

The comedian – who presents The Daily Show – clapped back at “internet racists” who disapproved of the black actress playing the character of mermaid Ariel.

In a snippet from one of his shows this week, Trevor Noah reacted to the criticism surrounding the casting of The Little Mermaid.

Following the release of the trailer, trolls spammed the comment section with insulting, racist, and body-shaming comments about Halle Bailey, and the production at large.

And Trevor Noah has had enough. He said in a clip: “Once again, a bunch of internet racists are upset that a fictional character is being played by a black person. And honestly, I don’t know what the big deal is”.

Trevor then joked: “You realise that Nemo was black too? That whole movie was about a fish who can’t find his dad. I can say that because my dad left and he’s white, so who’s racist now?

“Of course, The Little Mermaid is black. Everyone whose name starts with ‘Lil’ is black”.

He added in defence of Halle Bailey: “So stop being ridiculous…I hope this scandal doesn’t overshadow the rest of the movie”.

Meanwhile, Halle Bailey touched on how she dealt with criticism of her role in The Little Mermaid.

She told Variety last month of her motivation for playing Ariel: “I want the little girl in me and the little girls just like me who are watching to know that they’re special and that they should be a princess in every single way.

“There’s no reason that they shouldn’t be. That reassurance was something that I needed.”