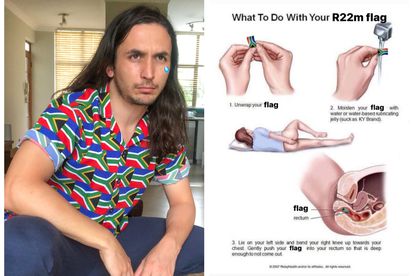 Never one to shy away from calling out public servants, The Kiffness has done it again. This time with an explicit message to Minister of Arts and Culture Nathi Mthethwa

The Kiffness joins the likes of Bonang Matheba, Pearl Thusi, Siv Ngesi, and Mmusi Maimane who have all publicly ridiculed the minister.

In it, the muso gave the minister clear instructions on what to do with the R22 million proposed flag project – in simple terms sticking it where “the sun doesn’t shine”.

When asked about how the minister should “fit” the R30 million National Philharmonic Orchestra programme announced last month into the said body part, The Kiffness responded to a tweep: “Begin with the flutes”.

Begin with the flutes

The Kiffness also rubbished plans to have a “second Eskom”. He tweeted: “The 2nd Eskom’s sole purpose is to power the flag’s night light”.

Stand-up comedian Nina Hastie has also offered her hilarious perspective about Eskom, loadshedding, and being left in the dark…