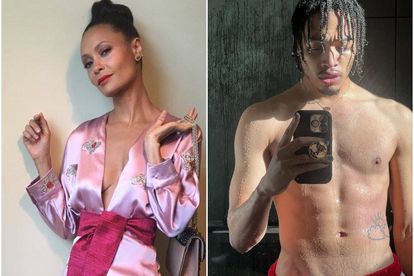 Thandiwe Newton has faced renewed speculation about her personal life, and pictures of her smooching her new younger bae have added fuel to the fire

The actress has been at the centre of a scandal surrounding her life off-set: from reportedly splitting from her husband of 23 years Oliver “Ol” Parker to having a tiff with Magic Mike co-star Channing Tatum.

The 49-year-old British-born star is also rumoured to be heading to rehab over issues pertaining to her mental health.

In pictures published by MailOnline, Thandiwe Newton is seen strolling hand-in-hand with her new bae; 25-year-old rapper Lonr in Miami over the weekend.

According to the publication, the star ditched her wedding ring, confirming the news of her split.

Thandiwe was also seen passionately kissing the Californian rapper during their outing. Lonr is only four years older than her eldest child with her estranged husband: daughter Ripley.

Lonr also confirmed his romantic relationship with the veteran actress, hinting at her marriage split.

He told Page Six: “From the relatively short time I’ve been fortunate to spend with her, I know Thandiwe and Oliver care deeply about the welfare of their children. That’s all I care about right now.”

The star was seen on set of the movie, starring Channing Tatum.

According to reports, Thandiwe quit the film after having a disagreement with the male lead.

Warner Brothers, however, insist Thandiwe left on her own accord. They said in a statement: “Thandiwe Newton has made the difficult decision to step away from the production of Warner Bros. Pictures’ Magic Mike’s Last Dance to deal with family matters.”