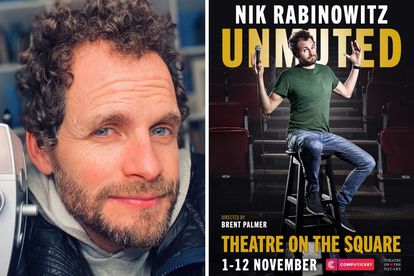 Comedian Nik Rabinowitz has reacted to reports his comedy show in Sandton is one of the targets of a terrorist attack.
Image via Facebook:
Nik Rabinowitz

Comedian Nik Rabinowitz has reacted to reports his comedy show in Sandton is one of the targets of a terrorist attack.
Image via Facebook:
Nik Rabinowitz

Just like the rest of South Africa, comedian Nik Rabinowitz is taking a terrorist attack alert on Sandton with a pinch of salt.

The funnyman reacted to the news, a day after the US Embassy issued an alert of a possible attack occurring this weekend.

According to News24, “sources”, Nik Rabinowitz’s latest production has become one of the targets of alleged terrorists linked to ISIS.

The publication warned that the comedy show – titled Unmuted, as well as the Johannesburg Pride Parade, was in the firing line of an Islamic terrorist group.

News24 added that sources identified “seven individuals believed to be part of a cell aligned to the Islamic State (ISIS)”. It added that “the method of the potential attack, be it using a vehicle, firearms or explosives, could not be independently verified”.

Nik Rabinowitz’s comedy production will take place at the Theatre on the Square in Sandton City. However, the show only kicks off next week, running from 1 -12 November.

A description of the show reads: “Having spent the pandemic doing his own research on YouTube, Nik Rabinowitz is now finally ready to connect the dots, wake up the sheeple, and take you down the rabbit hole into our crazy post-pandemic world.

2022.10.27 – Nik Rabinowitz, Comedian – Discussing his perspective with reports that his comedy show might be on of targeted events for terror attacks in Sandton

Meanwhile, Nik Rabinowitz shared his thoughts about the terrorist attack in an interview with the Jewish radio station Chai FM.

Clearly poking fun at the drama unfolding, the entertainer quipped: “People have underestimated me before.

“Finally that business science and marketing degree is paying off”.

On a serious note, Nik claimed that he was unnerved by the news that broke on Wednesday afternoon.

He said: “I felt worried about it. I had to focus on this week’s Parashah [a passage of Jewish scripture] and that helped me deal with the anxiety”.

But his fears were short-lived. He added: “ISIS are not interested in Nik Rabinwitz’s show, which honestly I felt hurt about.

And in a message for his Jewish fans who were concerned about attending the show, he added: “Please show up en masse. Let's send a statement to ISIS. Which will be something like: ‘If you want to blow up our comedian, you have to blow us all up first’”

A post shared by Theatre On The Square, Sandton (@theatreonthesquare)