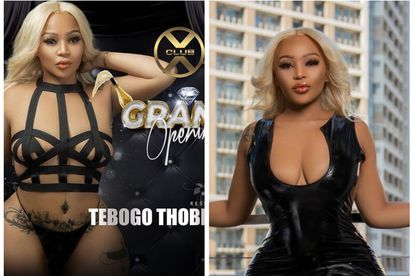 Actress and influencer Tebogo Thobejane is laughing all the way to the bank after her strip club: Club X revealed their exorbitant price list.

The Sandton hotspot made headlines last week after its grand opening featuring a bevy of beautiful women.

The steep fees grant patrons entrance into the strip club and nightclub as well as an unlimited buffet served all night. VIP guests also have the option of choosing private booths to indulge in one-on-one sessions with the strippers. The club operates bi-weekly- on Thursday and Saturday evenings.

Tebogo Thobejane previously defended Club X from public criticism. The Muvhango star told Tshisalive: Everyone has to have a retirement plan”.

She said: “We’re trying to push women in business … I’ve always been about sexiness and women empowerment. Dancing is a profession all over the world, people are doing it and there aren’t any jobs in SA, so what must girls do?”

CASSPER: ‘I HAD FUN…MAYBE TOO MUCH’

He said in a tweet: “There’s this new club in Sandton called Club X. It’s owned by a black woman.

“They have fresh warm food all night for free. The [club] is very expensive but TRUST ME, that’s gonna be the new spot!! People are bored of the same s**t. I surely had fun out there. Maybe too much fun…”