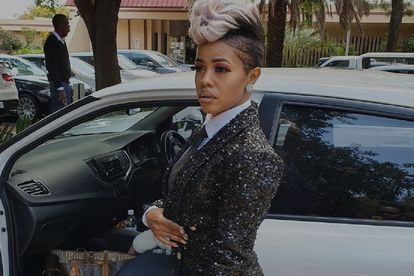 Zandie Khumalo’s interview on eNCA about the murder of Senzo Meyiwa did not convince tweeps. Image via @zandie_khumalo_gumede

Zandie Khumalo’s interview on eNCA about the murder of Senzo Meyiwa did not convince tweeps. Image via @zandie_khumalo_gumede

The Twitter streets have weighed in following musician Zandie Khumalo-Gumede’s interview on eNCA on Monday 18 July.

The Ikhwela singer, who was present on 26 October 2014 when Orlando Pirates and Bafana Bafana goalkeeper Senzo Meyiwa was slain, did not quite convince tweeps with her emotions as they claimed her crying was nothing but “crocodile tears.”

ZANDIE KHUMALO GIVES HER SIDE OF THE STORY

As one of the witnesses on that fateful day almost eight years ago, Zandie sat down with journalist Slindelo Masikane to unpack the events of the tragedy.

According to the singer, the investigations have gone on for far too long and all she wants is her day in court, as does her sister, Kelly Khumalo, who was the late soccer player’s girlfriend at the time.

Zandie revealed that she and Longwe (who was her boyfriend at the time) were “interrogated” for hours after Meyiwa’s passing, adding that they were also asked to give additional statements. Months or years later, the investigating officers got her, Kelly and their mother Ntombi Khumalo to role-play and also take lie detector tests.

An emotional Zandie revealed that her family and neighbours have suffered a lot because of the tragedy that took place at their home in Vosloorus that night. However, she dropped a bombshell when she alleged that Meyiwa’s wife, Mandisa Mkhize, could have been behind the star’s murder.

“No one has ever looked at Mandisa. No one! Why wasn’t Mandisa’s phone also taken? Why is Mandisa not investigated?” she questioned.

She went on to point fingers at the Meyiwa family, especially the matriarch, alleging that her hate for Kelly could have led to the incident.

According to Zandie, the goalie’s mother hated her sister, Kelly, so much that she allegedly used umuthi to cast a spell called “isichitho” on the Empini singer to get her and her son to break up.

“To what length did she go to make sure this [relationship] does not happen? Is it even possible that she and her daughter-in-law [Mandisa] ordered a hit, not necessarily to target Senzo but to target Kelly?” Zandie asked.

WATCH A SHORT CLIP OF THE INTERVIEW IN THE VIDEO BELOW

TWEEPS ARE NOT BUYING HER ‘TEARS’

At times during the interview, Zandie seemed emotional. At some point, she asked for tissues but tweeps are just not buying it.