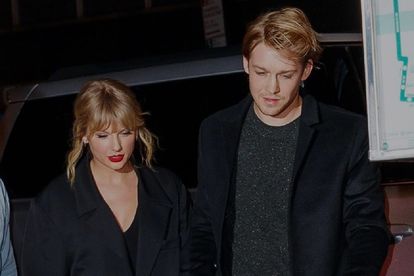 Taylor Swift and her British boyfriend Joe Alwyn are engaged and have been for months now. Image via @aiirie12/Instagram

Taylor Swift and her British boyfriend Joe Alwyn are engaged and have been for months now. Image via @aiirie12/Instagram

Congratulations are in order (although quite late) for musician Taylor Swift and her actor beau Joe Alwyn who have reportedly been engaged for months now.

According to The Sun, the Blank Space singer has been wearing an engagement ring “behind closed doors” and “everyone has been sworn to secrecy.”

TAYLOR SWIFT AND JOE ALWYN’S ENGAGEMENT IS ‘JUST FOR THEM’

An insider revealed to the outlet on Wednesday 29 June that Taylor, 32, and Joe, 31, are “incredibly happy and very, very in love.”

“They’ve actually been engaged for a few months but have only told their inner-inner circle — basically immediate family, and trusted, very old friends. Everyone has been sworn to secrecy, too,” the source explained.

According to the source, the couple is trying to keep the news away from the cameras as much as possible as their alleged engagement is “just for them.”

Although a wedding date has not yet been leaked, The Mirror reports that the lovebirds are said to be planning a “simple yet elegant wedding.” And sadly for The Swifties, the couple is not lured into the prospect of lucrative magazine or TV deals for its special day.

“And if and when they do exchange vows, there most definitely won’t be any Vogue, Rolling Stone or Hello! magazines there. It will be simple and elegant — like them.”

Taylor and Joe have been together for six years and have been reportedly splitting their time between the US and London.

However, the pair’s relationship intensified during the Covid-19 pandemic when they started living together throughout the lockdowns.

Unlike her previous relationships, which were in the public eye, the multi-award-winning pop sensation decided to take a different approach with this relationship and only gives fans some glimpses into her love life through her music.

In 2019, the Last Letter From Your Love actor told The Sunday Times that he liked when Taylor wrote songs about him and that he finds it flattering.

A talented writer himself, the actor co-wrote songs with Taylor for her 2021 albums, Folklore and Evermore under the pseudonym William Bowery.

In 2020 the Bad Blood singer hinted that Joe helped inspire her song Peace.

A post shared by Legends of Taylor Swift (@legends_of_taylor_swift)

Before Joe, Taylor dated English actor Tom Hiddleston. Between March 2015 and June 2016, she was with fellow chart-topper Calvin Harris, this was after her relationship with Sign of the Times hitmaker Harry Styles.

The singer has also dated John Mayer and Jake Gyllenhaal.