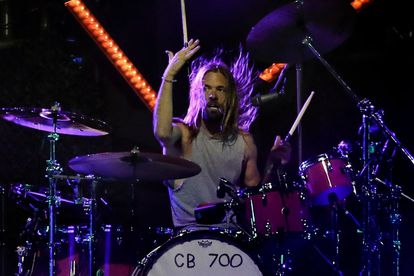 Picture taken on 18 March 2022 of Foo Fighters’ drummer Taylor Hawkins on stage at the Lollapalooza 2022 music festival in Santiago. Preliminary toxicology results show that Hawkins, 50, of the multi-Grammy award-winning rock group the Foo Fighters had opioids and other drugs in his systems before he died while on tour in Bogota, Colombia. Image: Javier Torres / AFP

Picture taken on 18 March 2022 of Foo Fighters’ drummer Taylor Hawkins on stage at the Lollapalooza 2022 music festival in Santiago. Preliminary toxicology results show that Hawkins, 50, of the multi-Grammy award-winning rock group the Foo Fighters had opioids and other drugs in his systems before he died while on tour in Bogota, Colombia. Image: Javier Torres / AFP

Preliminary toxicology tests found that Foo Fighters drummer Taylor Hawkins had marijuana, opioids and other drugs in his system before he died, Colombian investigators said Saturday.

Hawkins, the 50-year-old drummer for the Grammy award-winning rock group, passed away in a hotel in Bogota shortly before the group was set to perform at the Festival Estereo Picnic on the city’s outskirts, according to a statement on Saturday from the mayor’s office.

Colombian investigators said preliminary post-mortem tests found several drugs in the musician’s system but did not specify whether the mix caused his death.

“The urine toxicology tests performed on Taylor Hawkins’ body preliminarily found 10 types of substances,” including THC – which is found in marijuana – tricyclic anti-depressants, benzodiazepines and opioids, investigators said in a statement.

Forensic doctors were working “to achieve full clarity of the facts that led to (Hawkins’) death,” they added.

The mayor’s office said a local emergency line received a call late on Friday about a “patient complaining of chest pains.”

A doctor “performed the respective resuscitation manoeuvres, but there was no response and the patient was declared deceased,” it added, giving no cause of death.

The festival announced the cancellation of the group’s show, as well as another one set for Sunday in Sao Paulo.

Thousands of shocked and tearful fans at the Bogota venue lit candles and held a minute of silence after the news broke.

“The Foo Fighters family is devastated by the tragic and untimely loss of our beloved Taylor Hawkins,” the band said in a statement on Twitter.

“His musical spirit and infectious laughter will live on with all of us forever.”

DAVE GROHL ON HOW TAYLOR HAWKINS JOINED THE FOO FIGHTERS

As part of one of the world’s most influential and critically lauded alternative rock bands, Hawkins was known for his on-stage charisma and classic rock-inspired beats, which he once said were influenced by legends like Phil Collins and Queen’s Roger Taylor.

He had played with Foo Fighters since 1997, when he was taken on by lead singer and former Nirvana drummer Dave Grohl, providing percussion on some of the group’s biggest hits, including Learn to Fly and Best of You.

In an interview with 95.5 KLOS last year, Grohl described his first meeting with Hawkins and how he convinced him to join his band.

“I was like, ‘Wow, you’re either my twin or my spirit animal, or my best friend!’ in the first 10 seconds of meeting him,” he said.

“And, of course, I’d seen him play the drums and I thought he was an amazing drummer,” he added.

“When I called him and said, ‘Hey, I’m looking for a drummer,’ he said, ‘You know I’m your guy.’ And I think it had more to do with our personal relationship than anything musical.”

Foo Fighters celebrated their 25th-anniversary last year in a pandemic-delayed tour and had most recently produced Studio 666, a rock-and-roll horror movie.

Tributes poured in from across the music world, with Black Sabbath frontman Ozzy Osbourne hailing Hawkins as a “great person and an amazing musician,” and punk rocker Billy Idol describing the news as “tragic.”

“In utter disbelief at the news of Taylor Hawkins,” rockers Nickelback said in a statement on Twitter.

“Our deepest condolences to his family, his bandmates, his team, his friends and everyone that was ever touched by the music he created with @foofighters @Alanis and so many others.”

“He brought so much joy to the world of music, he will be forever missed,” they said, offering condolences to Hawkins’ family and bandmates.