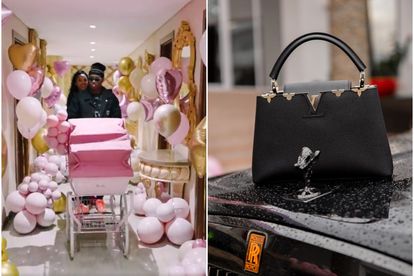 Tamia Mpisane has shown off her extravagant push present from husband Andile.
Image via Instagram
@tamia_mpisane

Tamia Mpisane has shown off her extravagant push present from husband Andile.
Image via Instagram
@tamia_mpisane

If baby Miaandy’s homecoming video gave you chest pains, a push present gifted to new mom Tamia Mpisane by her husband Andile will surely have you green with envy!

PUSH PRESENT: THE BAG TO RIVAL ALL BAGS

In a clip posted on her Instagram account, Tamia Mpisane showed off an over-the-top welcome home ceremony for baby Miaandy, whom she gave birth to on Sunday 15 May.

The baby girl is Tamia’s first and her husband Andile Mpisane’s third. He shares two other daughters: Florence “Flo” and Likuwe “Coco” with ex-girlfriend Sithelo Shozi. And no expense was spared for the new Mpisane princess, which tweeps said rivalled the extravagant nature of South Africa’s R22 million proposed flag project

But that wasn’t all, Tamia Mpisane showed off that she was just as pampered as her precious bundle of joy. The flashy star showed off a push present from her husband – a black luxury Louis Vuitton Capucine handbag valued at nearly R100 000.

According to Luxity, the bag – named after Louis Vuitton’s very first store in Paris – has been touted as the “Louis Vuitton equivalent of the Hermès Birkin”.

IS TAMIA MPISANE SECURING THE BAG?

And just as they were with Miaandy’s homecoming, social media users were dumbfounded by the price tag of Tamia Mpisane’s push present.

See what tweeps had to say about it…

@QLubanzi: “A whole RDP house in her hands”

@Sbuda_ma7: “Teach me your prayer. You are blessed”

@Lowndiwe: “Lord of Tamia locate me”

@KellyZenande: “The girl secured the bag for real. Mission accomplished”