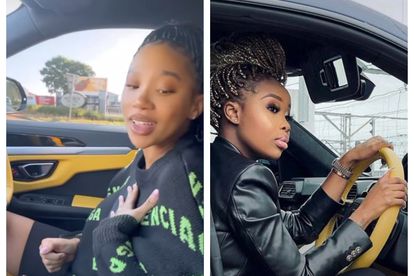 Tweeps have poke fun at Tamia Mpisane driving a car once driven by Sithelo Shozi.
Image via Instagram
@tamia_mpisane
@_sithelo

Tweeps have poke fun at Tamia Mpisane driving a car once driven by Sithelo Shozi.
Image via Instagram
@tamia_mpisane
@_sithelo

It’s no secret that Tamia Mpisane and Sithelo Shozi have been pitted as love rivals to Royal Am chairperson Andile Mpisane.

This, especially after the son of Shauwn Mkhize wed Tamia under baby mama Sithelo’s nose in what tweeps have deemed a “shotgun wedding”

But Tamia has clapped back at Twitter commentary surrounding her relationship. This, after one troll, mocked her being seen in a luxury car once driven by Sithelo Shozi who preceded her.

In a tweet posted this week, a tweep poked fun at Tamia Mpisane by sharing a clip of her driving a Lamborghini Urus, reportedly belonging to her husband Andile.

The new mom was seen sitting in the driver’s seat of the luxury car, which is valued at between R4 to R5 million. The metallic blue SUV features a yellow interior and luxury finishes.

In October 2021, Sithelo Shozi shared pictures and videos on Instagram of her in the driver’s seat of the same car. “Nice to meet you”, she captioned the posts.

In June, Andile himself posted a video in the Lamborghini, inviting his fans to join him in a dance challenge.

“This car though”, the tweet mocked, sharing screenshots of both women in the same car.

It’s not the first time Sithelo was spotted posing alongside a car belonging to her former boyfriend. The DJ has also posted pics of her flaunting Andile Mpisane’s G-Wagon and Lamborghini Huracán.

Fast forward to November, Andile would buy Sithelo – who is mom to his two daughters Florence “Flo” and Likuwe “Coco” – a luxury BMW, just one month before his wedding to Tamia Mpisane.

According to reports, Andile allegedly demanded the BMW back from Sithelo following his wedding.

Tamia Mpisane – who is usually silent rumours surrounding her private life – clapped back at the tweep’s insinuations.

She replied to the post: “Nawe uyafuna uk’shoota nayo? [Do you also want to take a pic with it?]”.

But others used the post as a means to warrant more beef between the women.

Meanwhile, both Tamia Mpisane and Sithelo have shared similar Instagram Stories in the past day; one about quotes on “timing”, and the other idiolising Hollywood couples.