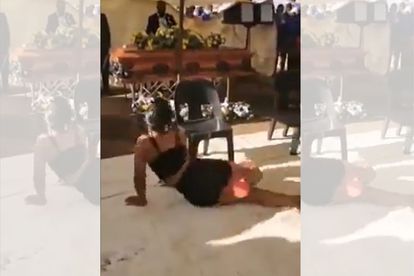 Strippers recently celebrated the life of the popular exotic dancer Mduduzi ’Cardbury’ Zwane at his funeral over the weekend.

Zwane was a well-known stripper, fitness model and OnlyFans content creator. He reportedly worked with Moonchild Sanelly and Somizi through his private dancing career, and also appeared on Moja Love. Now, according to IOL, friends and family gathered to attend his funeral after Zwane was gunned down in Atteridgeville last week.

The publication reports that a close friend of Zwane said that he was not a stripper, but rather an exotic dancer and that they wanted to pay their respects.

“We are exotic dancers rather than strippers. The show at the funeral was a way to pay our last respects,” Phuti “Temptation Man” Laka told the Pretoria Rekord.

Laka also said he still could not come to terms with the death of Zwane who was found lying in the street. He later succumbed to his injuries at Kalafong hospital. No arrests have been effected as yet, but the police are currently busy tracing the suspect.

“I feel like someone will tell me it’s a joke, or it was just a dream,” he explained. “We have been friends for five years.”

Laka said that Zwane was an honest person who always looked forward to the future.

“He was a dreamer. He took me from being a zero to being a hero. I am ‘Temptation Man’ today because of him.”

Zwane’s manager, Moshimane Makopo, later told IOL that they were still reeling after the shooting, as Zwane was known as a happy and humble guy to everyone who came across his path.

He said they suspected the motive behind the killing to be a jealous lover or boyfriend who was unhappy about his performances as just last year he had been assaulted.

However, the scenes of exotic performances by Zwane’s colleagues at the funeral in front of mourners did not sit well with some.

But, Makopo said that people might be confused but, as “Africans this is something that does not happen, but it’s similar to how known friends of gangsters would shoot up in the air to bid their fallen friend goodbye”.

“This was who he was, and we are grateful to the family for allowing us that moment.”