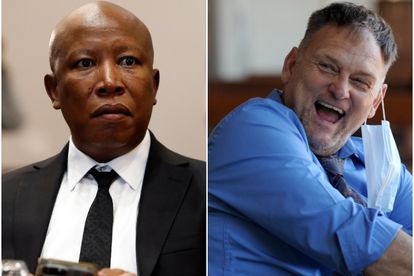 With “slapping season in session” due to Will Smith’s shock slap of comedian Chris Rock at the Oscars on Sunday, everyone’s fingers are itching to get in on the action. And Afrikaans singer Steve Hofmeyr is one of them!

The controversial South African star has been reeled into a meme about who should be next to be given five fingers to the face…and it’s no surprise who is at the receiving end!

ALSO READ: A slap in the face? Will Smith teaches boy to ‘fake slap’ in old clip [watch]

The meme read: “Can Julius Malema please host next year’s Oscars and make fun of Steve Hofmeyr’s wife? I want to see something”.

Steve – whose disdain of the Economic Freedom Fighters (EFF) leader (and vice versa) has been long documented, shared an interesting caption.

He wrote: “Sometimes I don’t have to do anything, then the memes come streaming in”.

“O, it’s the best yet. Slaps won’t be the only thing dealt”; and

“You will definitely also walk out with an Oscar thereafter.”

Malema also weighed in on the Will Smith slapping incident, retweeting several posts supporting the actor for “defending his wife”.

This after Oscars host Chris Rock took aim at Will’s wife, Jada Pinkett Smith, in a “joke” about her bald head. Pinkett Smith suffers from the auto-immune disease alopecia which leads to hair loss.

ALSO READ: ‘If the Oscars were in SA’: Lasizwe reacts to slap in hilarious clip [watch]