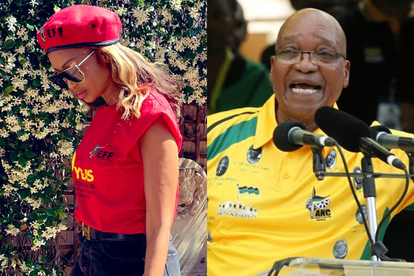 Jacob Zuma just wished Babalwa a happy birthday and she is bursting with excitement. Images via Twitter: @Nhleiks5/@barbiliscious

Jacob Zuma just wished Babalwa a happy birthday and she is bursting with excitement. Images via Twitter: @Nhleiks5/@barbiliscious

Babalwa Mneno is one of South Africa’s most lavish socialites. In 2021 human trafficking rumours plagued the star who still denies all allegations.

Things have seemingly cooled down for “Barbz” who celebrated her birthday on Saturday 13 November this year at Konka. She was surrounded by industry friends, Pearl Thusi and the EFF’s Julius Malema and seemingly had a blast.

Despite the fact that her birthday was full of fun, the best part for her was receiving a birthday wish from the country’s former president, Jacob Zuma.

Heading to her Instagram page, Babalwa gushed over the birthday wish. She also expressed how gratifying it was that Zuma took the time to write her a special birthday message.

The girl she thinks she is

“Which level of ‘I’m the girl I think I am’ is this one? I, Miss Babalwa Mneno, had the pleasure to receive a birthday message from our president JG Zuma! Like, I can’t even express how gratifying this was,” she captioned a clip of Zuma sharing his birthday wishes.

In the clip, Zuma is wearing his famous shirt while praising Babalwa for her pan African passion.

“Happy birthday Babalwa. hear today you are celebrating your birthday and in your mind, you’ve thought about an important thing called pan Africanism. I’m very happy that you are thinking about pan-Africanism.

“And I think many in your generation ought to think about this because it is an important concept,” Zuma said.