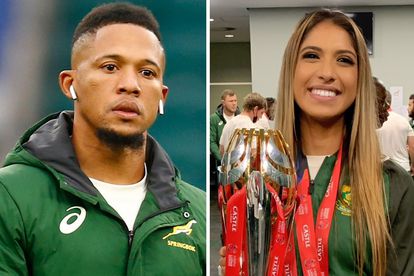 Springboks dietician Zeenat Simjee has broken her silence for the first time this week, pouring cold water over allegations she had an affair with player Elton Jantjies.

The brunette released a statement on Friday after recently being sent home from Argentina alongside Jantjies following the bombshell allegations.

Last weekend, Zeenat and Jantjies were in the South American country as part of the Boks match against Argentina in the Rugby Championship.

Elton Jantjies released his own statement – however, the controversial sportsman apologised to the public to “everybody I hurt or disappointed”.

In her statement, Zeenat Simjee slammed Rapport for running with news of an alleged affair, which she claimed was “false and baseless”.

According to the publication, Elton Jantjies wined and dined Simjee with candle-lit dinners, Moët & Chandon Champagne, and spa treatments during a stint at a Mbombela guest house earlier this month.

But now the bok dietician – responsible for providing expert advice on nutrition to the Springboks team – denied allegations that she and Elton Jantjies were ever at a guesthouse together.

She also called on the publication to “retract and apologise”.

Read the full statement by Zeenat Simjee below:

“I am the subject of some extremely negative media reports over the last week, tarnishing me personally and degrading my dignity.

“I chose to maintain a dignified silence while the media storm was raging, as I am severely traumatised by what has transpired.

“Let me unequivocally state that I am shocked at the level of sensational journalism from the newspaper that first published the article. I am devastated by the fact that a journalist and his newspaper could publish such damaging allegations on false and baseless hearsay. It is disappointing.

“As a young professional, I hold my profession in high regard. In the same light, it is an honour and privilege to represent my country and be part of the Springbok Team. As a person of values, I will not bring about disrepute to myself, my family, my profession, and all the many incredible people that have been kind, positive, and supportive towards me throughout this ordeal.

“The weekend ahead of the test week in Mbombela, I had been with my parents dealing with a family bereavement. So, the allegations of me spending time with Elton Jantjies at a guesthouse is devoid of any truth.

“This has cast an extremely negative aspersion and disgraceful perspective on my character to which other media houses have also added their perspective. I appeal to the original publisher to retract and apologise for the negative sentiment cast on me.

Meanwhile, Elton Jantjies also released a statement on Friday denying the news of an affair with Zeenat.

However, the married, father of three used the opportunity to “apologised unreservedly to everybody I hurt or disappointed, my teammates, the Springbok management team, and SA Rugby.”

He added: “As a Springbok rugby player, I am a public figure, a role model, and a hero to many South Africans, and I am expected to adhere to a high standard of moral values.

“My intention was always to make myself, my family, and my fans proud, not only through my performances on the field of play but also through my behaviour in public.”.

“I did not do the Springbok jersey – a jersey that I revered since I was just a little boy – proud.”

Of Zeenat, Elton added: “For the record, the Springboks dietician, Zeenat Simjee, was never with me at either of the two guesthouses that I stayed at. She is a good friend and nothing more.

“That her good name is now being dragged through the mud is a shame. I will now concentrate on getting my life and career back on track and wish to do so privately, so this will be my only statement on this matter.”

ALSO READ: Who is Elton Jantjies’s ‘mistress’? 5 things to know about Zeenat Simjee