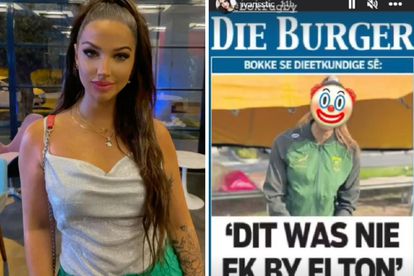 Elton Jantjies’s wife Iva Ristic has described Zeenat Simjee of being a ‘clown’ after the Springbok dietician claimed that the affair allegations was a case of ‘mistaken identity’.
Images via Instagram
@ivarisstic

Elton Jantjies’s wife Iva Ristic has described Zeenat Simjee of being a ‘clown’ after the Springbok dietician claimed that the affair allegations was a case of ‘mistaken identity’.
Images via Instagram
@ivarisstic

The drama between Springboks player Elton Jantjies, his wife Iva Ristic, and the woman he claimed to have an affair with – team dietician Zeenat Simjee – is heating up! And now the two women linked to the flyhalf are seemingly going head to head…

Last week Elton Jantjies confessed in a News24 article to cheating on his wife Iva with Zeenat. However, Zeenat has now claimed that the whole ordeal is a simple case of “mistaken identity”. To add insult to injury, Iva has accused the dietician of texting her husband behind her back.

In September, Elton Jantjies and Zeenat Simjee made headlines after an eyewitness spotted them at a guesthouse in Mbombela a month earlier. According to reports, the duo were accused of having a romantic relationship after being spotted amid the Springboks’ Rugby Championship match against the All Blacks in Mbombela.

At the time of the report, the Springboks were in Argentina, and both Elton and Zeenat were sent home.

Later that month, Zeenat released a statement vehemently denying the allegations, stating that she was at a family engagement during the time of the alleged hotel tryst. She later returned to work and is believed to now be with the Springboks team amid their end-of-year European tour.

Speaking to Netwerk24 on Tuesday 15 November, Zeenat Simjee’s lawyer Frikkie Erasmus claimed that the woman seen with Elton Jantjies was not his client. He added that the woman closely resembled the dietician and was mistaken for her.

He told the publication: “It was a case of mistaken identity. She was not there”

Erasmus added that they are aware of the woman’s identity but have chosen not to disclose it. He continued: “There are many similarities between her and Zeenat. However, it wasn’t her.”

According to Iva, Zeenat is demanding that Elton remove all her pictures off his social media account – something he has done.

In September, Iva responded to Zeenat’s public statement by accusing the Springboks employee of “blocking” her on Instagram.

Iva shared in a series of Instagram Stories: “Confused reading the statement from the good-hearted Zeenat talking about [a] completely different weekend that has nothing to do with the timing of the actual incident is actually hilarious.

“And I still don’t get why she blocked me on Instagram and didn’t say a word to me”.

Sharing “proof” that Zeenat had blocked her on social media, Iva shared a screenshot of her DMS. In it, Iva texted Zeenat: “Is there anything you want to tell me?”

In the screenshot, the message was seen but seemingly not responded to.

IVA CLAPS BACK WITH ‘CLOWN’ EMOJI

And following the latest claims of “mistaken identity”, Iva has shared her thoughts – and it’s clear she’s not buying it!

Taking to her Instagram Stories on Tuesday evening, Iva Ristic shared a screenshot of the Netwerk24 article featuring a picture of Zeenat Simjee

But in place of Zeenat’s face was a clown emoji!

Over the weekend, Rapport claimed that Iva had approached Springboks coach Rassie Erasmus to “take action” against Zeenat.

According to the publication, Iva sent “proof” of the affair to Rassie Erasmus – in the form of screenshots of text messages.

Iva claims the texts alleged that Elton’s affair with Zeenat Simjee has been ongoing throughout various team matches.

One of the screenshots includes a reservation for a romantic boat ride at the Sydney Harbour – allegedly before the Springboks vs Australia test match on 3 September.

Others show hotel and flight bookings for two. But things get more sensational; the publication claims that in one of the messages, Zeenat tells Elton to “divorce” Iva, whom she describes as a “horrible woman”.