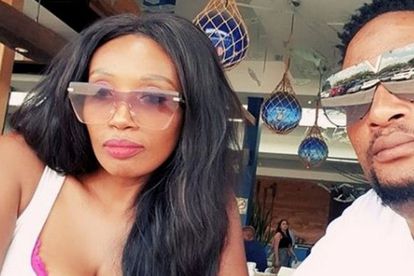 The actress and events co-ordinator took to her Instagram account for the first time since her aspiring rapper son Lwandile “Ocean L” Ndaba released a diss track dedicated to his stepfather Max Lichaba.

In the post, Sophie Ndaba wishes her daughter Rudo – who people often mistake as her “twin” – a Happy Birthday.

Rudo is a daughter from a previous relationship with former partner, actor Themba Ndaba, whom she conceived when she was 18 years old.

Reflecting on their close bond, Sophie wrote in the caption: “When you were born I was just a young girl. Not sure what mommyhood was all about. Growing up together brought my best friend closer.

“I will never stop thanking you for praying for me more than you did for yourself. Mommy is here because you too sent a word to God.”

MAX LICHABA: ‘THERE WAS NO MARRIAGE’

Rudo’s birthday celebrations are a welcome distraction for Sophie Ndaba who has had to deal with rumours of infidelity on the part of her third husband, Max Lichaba.

In the track, titled My Stepfather’s a Devil, Lwandile has put Max on blast for mistreating his mom by having an extra-marital affair and physically abusing her.

Following the release of the viral song, the businessman attempted to set the record straight by denying any claims of abuse levelled against him.

He did, however, admit that his marriage to the screen star is over.

He told TshisaLive; “My marriage for a very long time, there was no marriage. I’m not a monster, I’ve never been a monster.

“Yes, maybe, as women go through certain men to find the perfect man, I’ve been doing that. I’ve been going through two or three people to find ‘Miss Right’ and that doesn’t make me a monster.”

The couple have seemingly erased all posts of each other on social media after they tied the knot in 2018.